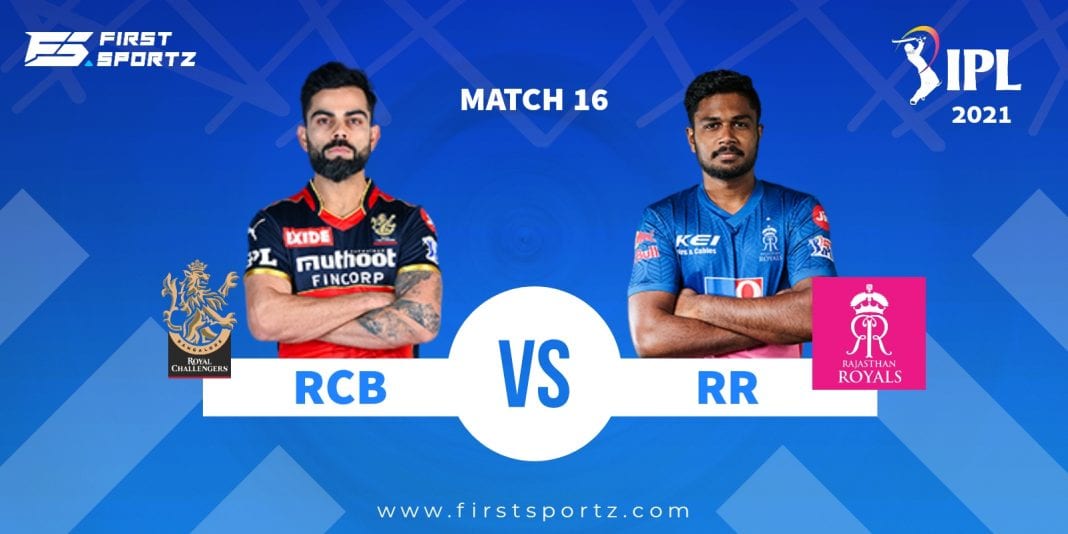 Royal Challengers Bangalore and Rajasthan Royals will face each other in the sixteenth game of the Vivo IPL 2021 at the Wankhede Stadium, Mumbai on Thursday, 22nd April. Royal Challengers Bangalore are on a roll, having won three games in a row, and will be hoping to keep their winning streak going. Rajasthan Royals, on the other hand, have only won one of their three matches till now.

Royal Challengers Bangalore are the only team in the tournament that are yet to lose a game, and they currently hold the top spot in the points table.

Bangalore captain Virat Kohli won the toss and opted to bat first in their recent game against Kolkata Knight Riders.

Kohli and Rajat Patidar were belted cheaply by Varun Chakravarthy in a single over. Glenn Maxwell then took the centre stage and smashed the bowlers out of the park as soon as he came to bat. He hit nine fours and three sixes in 49 deliveries for 78 runs. Devdutt Padikkal, who played the part of the anchor forthright, also scored a sluggish 25 runs.

AB de Villiers, the craftsman, played a stunning knock of 76 runs off 34 deliveries at the end of the innings, helping the team cross a massive total of 204 runs on a slow wicket of Chennai.

The bowlers did an excellent job in defending this total, restricting Kolkata Knight Riders to a total of 166 runs and winning by 38 runs. Kyle Jamieson took three wickets, Yuzvendra Chahal and Harshal Patel each took two wickets, and Washington Sundar took one wicket.

They have now moved to Mumbai and thus we can expect some changes in the side considering the wicket of Wankhede Stadium. Daniel Sams or Dan Christian might replace Shahbaz Ahmed in the team.

Chetan Sakariya was the best of the bowlers, taking three wickets. Chris Morris took two wickets, and Mustafizur Rahman and Rahul Tewatia each took one.

The Rajasthan Royals got off to a bad start when chasing this total, losing opener Manan Vohra and skipper Sanju Samson cheaply. Jos Buttler carried the innings by himself, scoring 49 runs off 35 deliveries. But, lack of contribution from other batters costed them the game.

Despite the fact that Rahul Tewatia scored 20 runs and Jaydev Unadkat scored 24, the team was nevertheless defeated by 45 runs. Rajasthan Royals’ middle order is a big problem for them, and they must be working hard to strengthen it. They were bamboozled by the spin bowling of Moeen Ali and Ravindra Jadeja.

Rajasthan Royals might replace Shivam Dube and Manan Vohra who have performed poorly so far. Mahipal Lomror and Yashasvi Jaiswal may get their first chance of the season.

The weather in Mumbai is expected to be partly cloudy with a lot of humidity. There are no chances of precipitation. The temperature may hover around 31 Degrees Celsius.

The pitch at Wankhede Stadium is a paradise for batting. We saw a high-scoring thriller in the last match and we can expect the same in this one too. The pace bowlers get some swing in the early stages of the match. With dew coming in as the game progresses, the team winning the toss would prefer to bowl first.

Royal Challengers Bangalore are the favorites to win this match. They come into this game behind a three-match winning streak and have a settled lineup. While, Rajasthan Royals still haven’t found their ideal combination and have a weak middle order.

Also Read: IPL 2021: Bhuvneshwar Kumar could miss SRH’s next game due to a thigh strain