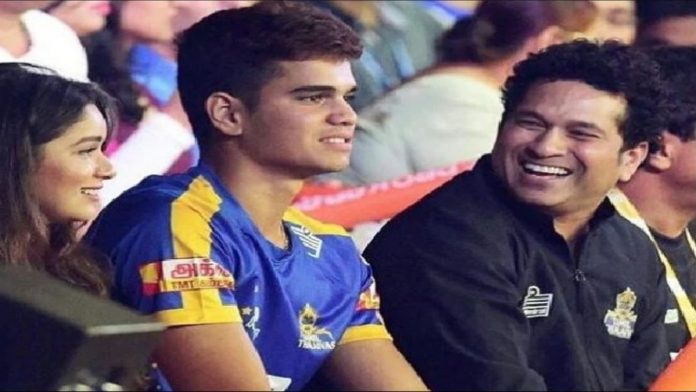 There has been a lot of talk surrounding Arjun Tendulkar, the son of cricket icon Sachin Tendulkar following his selection by the Mumbai Indians (MI) in the auction for the 2021 edition of the Indian Premier League (IPL). There have been allegations from fans on social media that Arjun was selected only because of his father Sachin and that he was a product of ‘nepotism’. The pacer has also received support from various quarters with calls for him to be judged after he is given a chance to prove himself.

Head coach Mahela Jayawardene explained the signing saying, “We’ve looked at it purely on a skill basis. I mean, there is going to be a big tag on his head because of Sachin. But, luckily, he’s a bowler, not a batsman. So I think Sachin will be very proud if he could bowl like Arjun. I think it’s going to be a learning process for Arjun. He just started playing for Mumbai, and now the franchise. He will learn the ropes; he will evolve. He’s still young.”

Sachin Tendulkar took to Twitter yesterday to express his thoughts on Virat Kohli who had shared his experiences with depression during the disastrous tour of England in 2014. He had also shared on how Sachin had helped him out of it by aiding him in both the technical and the mental aspects of going through a lean patch.

Sachin replied to a tweet mentioning what Kohli had talked of and wrote, “Virat Kohli, proud of your success & decision to share such personal experiences. These days youngsters are constantly judged on social media. Thousands speak about them but not to them. We need to be able to listen to them and help them flourish.”

Now, fans on social media have interpreted the latter part of the tweet about youngsters getting judged as a reference to Arjun Tendulkar’s signing by MI getting labeled as ‘nepotism’.

Also Read: India vs England 2021: “Pitch is the same for both teams” – Rohit Sharma responds to criticism of Chepauk pitch