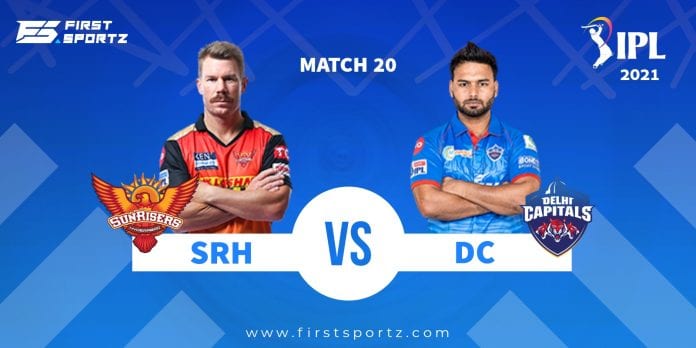 Sunrisers Hyderabad (SRH) will take on Delhi Capitals (DC) today in the twentieth match of the VIVO IPL 2021 on Sunday, 25th April at the MA Chidambaram Stadium in Chennai. SRH have got their first win after a three-match losing streak while DC are on a good run themselves. This could thus, be a cracker of a contest.

Sunrisers Hyderabad (SRH) had a horror start to the IPL 2021 season as they lost three matches in a row. In fact, all three matches followed the same template where SRH had a par score to chase in which they imploded after a good start in the Powerplay. With the template repeating itself match after match, SRH managed to stop it in the fourth match.

The Orange Army defeated Punjab Kings (PBKS) with a superb bowling performance that saw them bowl their opponent out for just 120. The chase was then completed easily as Jonny Bairstow and David Warner started off in an assured manner. After the latter’s dismissal, the returning Kane Williamson ensured that the formalities were completed with ease.

Following the victory, SRH would fancy their chances of winning two in a row.

Delhi Capitals (DC) were considered to be one of the top contenders to make it to the playoffs this season. They have done justice to the same as they have continued their good performances that made them a force to reckon with in last year’s IPL where they finished as runners-up.

So far, out of four matches, DC have come up trumps in three with a last-over loss against Rajasthan Royals (RR) being the only reverse. In their previous match against defending champions Mumbai Indians (MI), the bowlers led by Amit Mishra did an excellent job to restrict the opposition before Shikhar Dhawan helped ace the chase.

DC are bound to be upbeat and they would be favourites going into this match.

The weather in Chennai is expected to be partly cloudy and humid. There are no chances of precipitation. The temperature may hover around 30 Degrees Celsius.

The pitch at MA Chidambaram Stadium is slow. Batsmen would need to have sound technique to be able to score runs. The wicket offers assistance to the spinners and hence, we can expect a low-scoring thriller. Any total around 150 would be a challenging one. Team winning the toss would want to bat first.

Both teams wouldn’t want to make too many changes to a winning combination. But Bhuvneshwar Kumar is doubtful for the match and hence, Sandeep Sharma could slot it.

Both sides are coming off the back of wins. However, Delhi Capitals seem to have all bases covered and the side looks like one that could challenge for the title this year as well. SRH came good in the last game but the middle-order issues continue to exist. DC would thus, begin this match as favourites to come up trumps.