Delhi Capitals (DC) suffered a nail-biting defeat against Royal Challengers Bangalore (RCB) during match 22 of Indian Premier League (IPL) 2021. The Capitals could only score 170 runs at the loss of four wickets while chasing 171 set by the opponents. DC skipper Rishabh Pant and Shimron Hetmyer played well for their respective half-centuries but weren’t able to clinch the game for their side.

Former India cricketer Virender Sehwag was quite unimpressed with Pant’s captaincy during the DC vs RCB game. Sehwag’s remarks came after DC’s lead spinner Amit Mishra didn’t complete his quota of four overs as Pant gave the ball to Marcus Stoinis. The Australian all-rounder leaked 23 runs in the ultimate over of the first innings. The 42-year old said that he won’t give even five marks out of 10 for his captaincy.

“I won’t give him even five marks out of 10 for his captaincy because you just can’t make such mistakes. If your main bowler isn’t bowling, your calculations go wrong – that’s what captaincy is all about. You need to take care of that. A captain must manage his bowling resources according to the situation.

“You need to learn that. Or else you hand over the ball to whomsoever you want. The capability of a skipper is measured by how he turns the game around. He needs to make changes in the bowling or field position accordingly,” Sehwag told Cricbuzz.

Virender Sehwag suggested the DC skipper should play smart cricket in order to become a smart captain. He added that Pant needs to keep such small things in mind while leading the side.

“So, if Rishabh Pant wants to become a good captain, he needs to keep these small things in his mind. Play smart cricket, then only you can become a smart skipper,” he added. 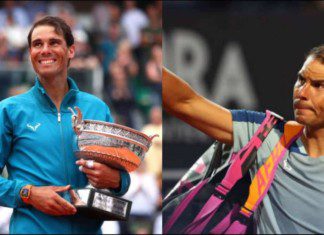 Lakshya Chopra - May 13, 2022
Things aren't going according to the plan for 21-time grand slam Rafael Nadal. After a historic start to the season where he won 3...