Dustin Poirier recently defeated Conor McGregor by knocking him out in the second round, although Dustin knocked him out with a punch the leg kicks, he was using were a big part of his game plan.

At almost every post-fight interview Conor also acknowledged that the leg kicks Dustin was throwing at him completely destroyed his lead leg and made a big impact on his performance.

Dustin recalls a similar experience he had in his fight against Jim Miller in an interview he said “I knew. I knew he was feeling it,” Dustin Poirier said. “I’ve had 40 something mixed martial arts fights, and I’ve never felt… You know, everything is kind of numbed during the fight.

“I’ve never felt more pain during the act of fighting than when my leg got kicked by Jim Miller over and over again at that night in New York.”

Dustin Poirier recalls all the injuries he’s been through and said the pain in his calves was the worst.

“My calf was in so much pain. I was surprised at how much pain I was feeling, even between rounds, when I was trying to listen to my corner. They were icing my leg.” 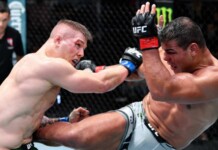 “I don’t agree with the referees,” Paulo Costa believes he won the fight against Marvin Vettori at UFC Vegas 41 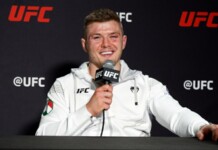 “Don’t show up overweight cause you know I’m going to take the fight,” Marvin Vettori shares a message for his next opponent after UFC...