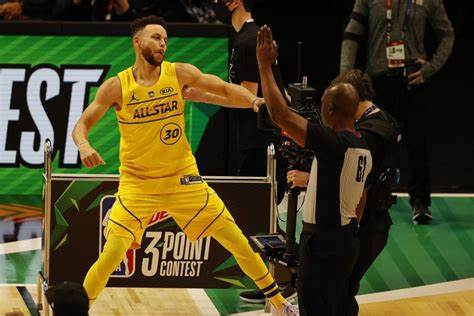 The NBA has unanimously vouched for the great shooting of Stephen Curry. The Golden State Warrior’s star is just a prodigy who can shoot the ball perfectly. He changed the NBA by introducing his limitless range on court. He might have been the player who get the three-pointers into trend. The frowned upon three-point shooting was encouraged upon by the great shooter. The Golden State Warriors and players that backed up Steph Curry like Klay Thompson brought in the shooting reform in the league. Former NBA All-Star joe Johnson highlighted how Stephen Curry has become the sensation and will soon re-write the history.

Steph has been the most overwhelming talents since 2009. Ever since he was acquired by the Dubs, Steph has always proved to be a better player every day. This is one the reasons he is 2nd in all time 3-pointers made list. Curry is still behind the NBA veteran Ray Allen in this competition. However, a lot of people think that he can easily surpass the Allen. Steph’s incredible ability to shoot the ball accurately is one of eh reason why Dubs were crowned with titles thrice in span of 4 years.

Joe Johnson debates why Steph is epitome of 3-point shooting

The former NBA All-Star Joe Johnson is awed by Stephen Curry’s excellence. He said, “We know Steph is the best shooter of all time. It’s not a question. We know he is gonna re-write the record books.’’ According to Joe, Curry has already earned that title of the greatest shooter and will inevitably break all three-pointer challenge. Joe has a similar hand as Steph. He is 12th on the lit of Three-points made in the All-Time record. But he might just go down as LeBron James is 7 made three pointers behind.

Steph Curry defines effortlessness in a way or two. He has so much understanding of the game. He always makes the right choice when to shoot or to pass the ball. Curry is just unstoppable once when he is on th ball creating a separation from defender with an instant jumper. However, the cultural shift this season has forced him down. Despite his excellent performance, GSW is still down trodden. Hopefully his MVP calibre performance can improve their standing before the playoffs.

Aikansh Chaudhary - June 16, 2021
In two days, the whole cricket world will have their eyes focused on two teams - India and New Zealand. The two teams will...