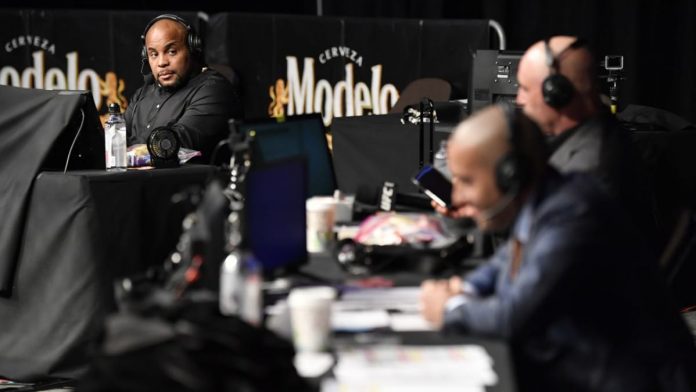 The usual pair of Daniel Cormier and Joe Rogan will be back on air, this weekend at UFC 260. Although, the pair have been receiving flak of late, for their “biased commentary”, a mega-event like UFC 260, wouldn’t be complete without DC and JR. The main event features heavyweight champion Stipe Miocic defending his belt against the dangerous Francis Ngannou, and the co-main event features the return of Tyron Woodley, who takes on Vicente Luque.

The fight will be taking place inside the APEX in Las Vegas, with Jon Anik providing the live play-by-play, while Megan Olivi will be tasked with handling the interviews. Michael Bisping, Chael Sonnen (Arguably two of the greatest trash talkers of all time) will be joined by Michael Eaves for the UFC 260 post-fight show.

Can Daniel Cormier and Joe Rogan pull it off?

There was much criticism about Daniel Cormier and Joe Rogan’s commentary at UFC 259, especially during the main event, which featured Israel Adesanya and Jan Blachowicz. A fan even asked DC on twitter, “Are you going to discect Rogan and your own extremely biased commentary?”

Cormier then replied to the tweet saying, “I just rewatched. I don’t agree at all. I was actually speaking to Jan and the times he was successful. I had the fight 2-2 going into (Round) 5 and after watching it again I feel same way. Nothing changed. And by the way, Jan did bite on a ton of fakes and feints. Izzy didn’t capitalize.”

Daniel Cormier will be calling arguably one of his greatest rivals, Stipe Miocic on air, in one of the most important fights of his career. Can Daniel Cormier and Joe Rogan come unscathed out of UFC 260?