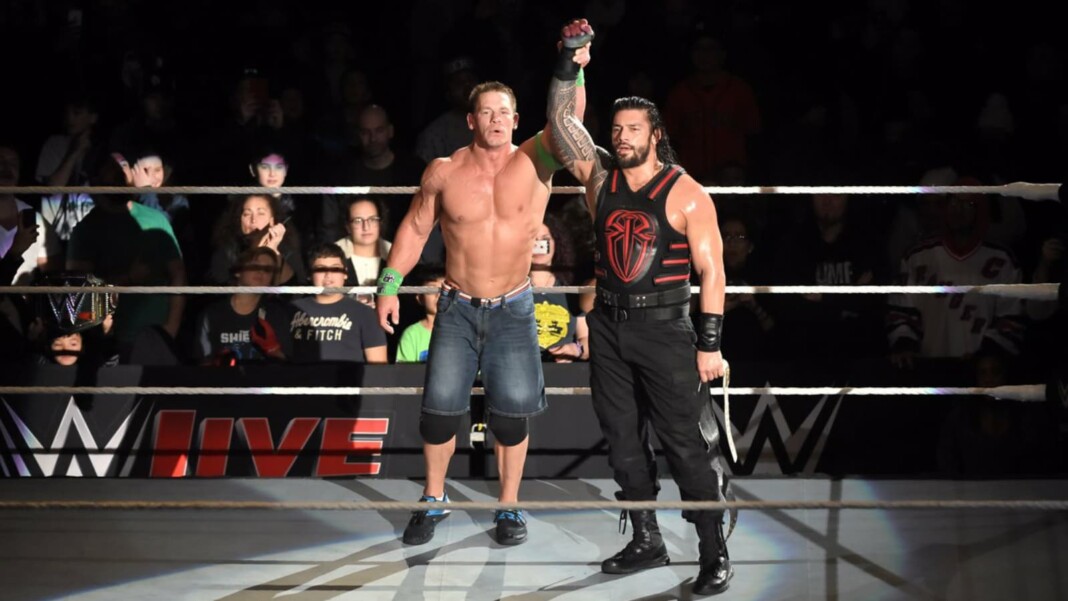 There has been a lot of speculations about the potential return of WWE legend John Cena. Cena has also confirmed the news of his return but the date of his return is still kept on hold. But reports suggest that Cena might be fighting the current Universal Champion Roman Reigns in a blockbuster main event at the Summerslam.

WWE had earlier planned the return of Brock Lesnar, who is expected to be back soon for a monumental showdown against the Tribal Chief. There were also speculations about a dream match for Bobby Lashley against Lesnar but the latter is said to be not convinced about the idea yet. As a result, Lesnar’s return has been delayed, and instead it might be John Cena who could be main-eventing Summerslam for the coveted title Roman holds.

Roman Reigns vs John Cena could be a possibility at Summerslam

WWE is hosting Summerslam at an NFL stadium which is the first time in history the brand has taken such a step. The occasion is set for the live crowd to enjoy and Vince is working on giving the most delightful of experiences to the returning fans. The suspense of Cena’s return is still mounting and there have been numerous reports of WWE wanting to make Summerslam an event equivalent to Wrestlemania.

While Summerslam could also see the return of Brock Lesnar, which is a bit unlikely, Cena’s return is gaining momentum as Roman has already issued a warning to Cena during a recent appearance on ACC Network. Roman said:

“If John wants to get smashed, then he knows where I’m at. When it comes to whooping people’s a**, I do not discriminate. Luchadores, mat wrestlers, legends, Hollywood superstars, anybody. Anybody can get it”

The Tribal Chief went after both Cena and The Rock further during the interview and adviced the two to not get near his ring.

“If I were these guys, I don’t know if I’d wanna come back and deal with me. I’m a problem right now for everybody. So if I were them, I would stay on set. I’d keep pumping out these streaming service movies. Don’t come to my ring is what I would do.”

Cena’s return could be a perfect plot for the WWE in their bid to make Summerslam as grand as the WWE. It is being said that with the presence of the live crowd, the brand wants to present Summerslam as this year’s Wrestlemania. To top it all, if Lesnar returns this Summerslam to face Bobby Lashley, the summer event would be the thing to watch out for without a shadow of a doubt.

Also Read: Roman Reigns to defend his Universal Championship against Edge at Money in the Bank 2021