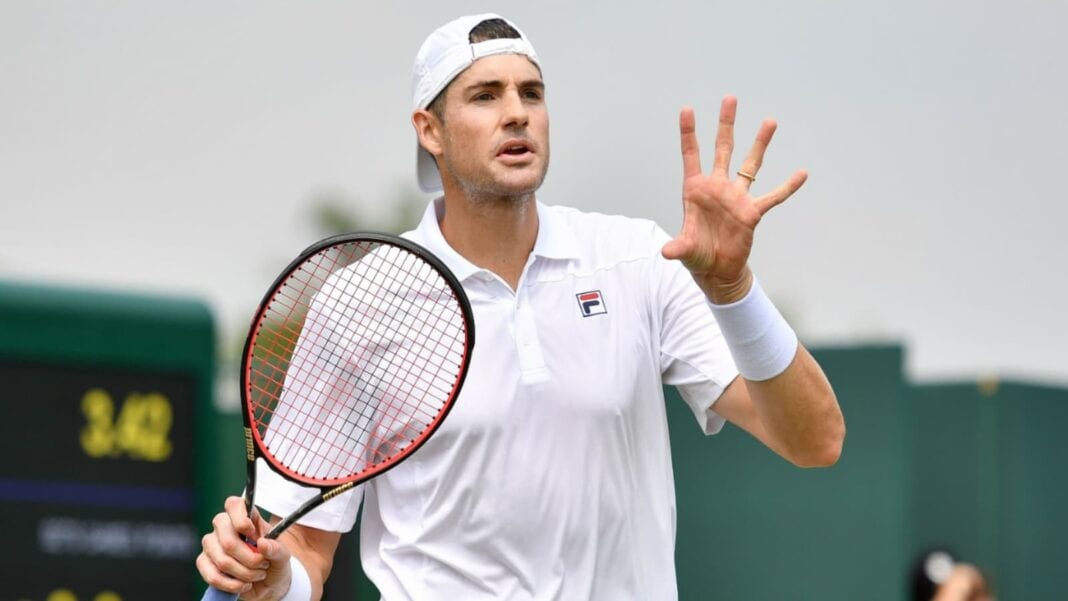 John Robert Isner is a professional tennis player from the United States. The Association of Tennis Professionals had him ranked as high as No. 8 in men’s singles. Isner’s serve is both strong and consistent. Isner also possesses a strong forehand, which he employs in conjunction with his serve. Isner frequently prefers for a one-two punch, with a powerful serve followed by a huge forehand.

Though he does not exactly serve-and-volley, he is known to back up his serves with advances to the net. Isner is regarded as one of the finest serves on the ATP Tour, reached his career-high singles ranking in July 2018 after winning his first Masters 1000 title at the 2018 Miami Open.

He also made it to the quarterfinals of the 2018 Wimbledon Championships. He now holds the record for serving the second-most aces in ATP Tour history, with almost 12,000 aces. During his first-round 2016 Davis Cup match, Isner hit the ATP’s fastest “official” serve ever and the third-fastest on record in tennis, achieving 157.2 mph or 253 km/h.

John Isner has a $14 million net worth. He went professional in 2007 and has won just about $8 million in prize money throughout the course of his career. In April 2012, Isner attained his career-high singles rating of #9 while playing for the University of Georgia.

In 2016, John Isner inked a multi-year sponsorship contract with Fila.  He has collaborated with TAMKO Building Products in the past. In 2019, Isner signed a contract with Defy, a sports performance drink brand. Runa and Betterment are two of his current sponsorship partnerships. In 2012, Isner and Ebix agreed to work together. In March 2018, Nulo Pet Foods collaborated with Isner. For a long time, Isner has relied on Prince tennis equipment.

Does John Isner have any charities?

In 2019, American founded the Isner Family Foundation to aid hospitals in the Dallas-Fort Worth region, allowing others to benefit from world-class care to help them fight their own battles. Isner has also been involved in a variety of charity initiatives, such as helping a fellow tennis player’s foundation or donating to other organisations.

Despite the fact that Isner was born in Greensboro, North Carolina, he prefers to live in Dallas, Texas.

In December 2017, John Isner married Madison McKinley. They married in a country-themed wedding at the Montage Palmetto Bluff in South Carolina. Hunter Grace Isner was born in September 2018 and is the couple’s first child. The family welcomed their second child in 2019 and named him John Hobbs.

Isner opened in 2010 in Auckland, New Zealand at Heineken Open. He reached his second career ATP final, and his first since Washington in 2007. Being unseeded he defeated 2001 Australian Open finalist Arnaud Clement by saving a championship point in the final.

Isner won his first ATP tour championship in Auckland, and he contributed $5,000 of his earnings to help relief efforts following the 2010 Haiti earthquake.

What is John Isner’s world ranking?

Cuuretly, he ranks 35th in the world.

How tall is John Isner?

Who is John Isner’s wife?

Madison McKinley is John Isner’s wife. The couple got married in 2017.

What is John Isner’s net worth?

John Isner’s net worth is $14 million.

Where was John Isner born?

When did Isner turn pro?

Does Isner have any grand slam?

Isner is yet to win a grandslam.

When did Isner won her first title?

What is the nationality of Isner?

Where does Isner live?

‘Hopefully Rafael Nadal plays in Madrid next year, he is the most beloved player in the tournament, says Feliciano Lopez