The former UFC Flyweight title challenger Joseph Benavidez isn’t having a good time inside the Octagon. He is on a three-fight losing streak with his latest loss coming against Askar Askarov at UFC 259.

Benavidez holds a victory over two-division UFC champion Henry Cejudo and after winning the majority of fights in the division he got the chance to face Deiveson Figueiredo for the UFC Flyweight title after Cejudo vacated it.

Figueiredo defeated Benavidez in two consecutive matchups and won the UFC Flyweight title. After that, he faced a loss in his latest fight and he is more broken than ever. Talking about this in his latest podcast with his wife Megan Olivi, Benavidez says,

“If talking about everything, I just couldn’t find the adrenaline, the excitement, and explosiveness, It’s a tough realization because I feel like why couldn’t I find that?”

“You come to this point I think in every sport that you just feel like you’re not the same person in there anymore. I’m not who maybe I used to be in there and I’ve had those thoughts a long time, you know, fighting for 15 years.”

“Some of the things that came so naturally to me like the scramble, like I’m mister scramble. And I see in the second round I got held down, and that was never a worry for me because taking me down is like taking yourself down – it’s pretty hard to hold me down. It wasn’t a thing.”

Benavidez is uncertain of his future

Prior to his three consecutive defeats, Joseph Benavidez only lost one of his last nine fights that too against Sergio Pettis and now he is uncertain about his future. Benavidez added, “I thought I could get out of that disappointment from the losses to Figueiredo, win, knock this guy off, and show I can compete at the top,”

“I thought I could avoid that inevitable disappointment and just somehow get it. It’s just hard. Not that if I would’ve won or lost had anything decided as far as my future goes.”

“I thought I could avoid that inevitable disappointment and just somehow get it. It’s just hard. Not that if I would’ve won or lost had anything decided as far as my future goes.” 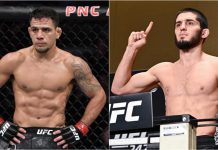