by Sachin Arora
in Featured, Kabaddi 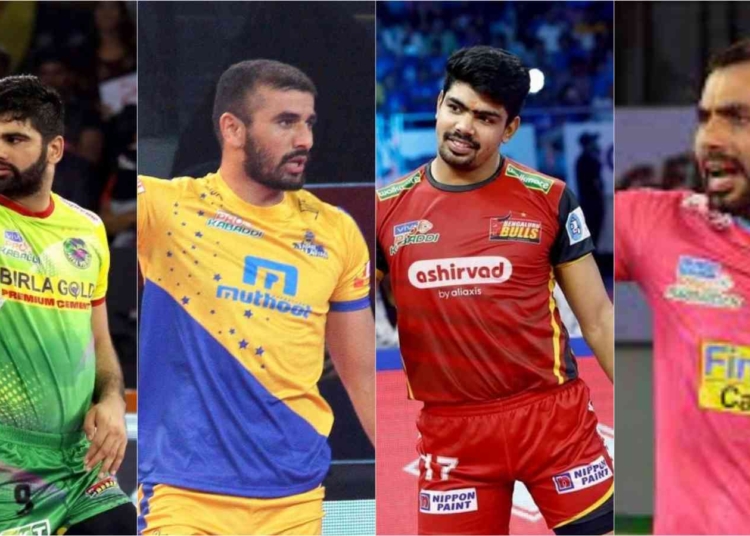 Raiders collect the most points for a team in a Kabaddi match and hence, they gain more popularity than the defenders. This is why it’s said that ‘raid is the focal point of kabaddi’. A couple of good raiders can change the whole tempo of the match within a few minutes owing to their superior techniques and tactics. Now, let’s look at the list of top raiders in the history of the Vivo Pro Kabaddi League (PKL).

Patna Pirates’ Pardeep Narwal is the most successful raider in the history of Pro Kabaddi. Pardeep has played 107 PKL matches till now in which he reached the mark of 1160 raid points which is more than anybody else in this tournament. His unbelievable raiding skills make him one of the best players in this league.

At a whopping 955 raid points, Rahul Chaudhari of Tamil Thalaivas is at the second spot on this list of top raiders in Pro Kabaddi. Chaudhari has played 122 PKL matches so far and is also the second player to score over 1000 total points in the league. He was a part of Telugu Titans till the last season before he finally moved to the Thalaivas.

Jaipur Pink Panthers’ skipper and ace raider Deepak Niwas Hooda is the third-most successful raider of Pro Kabaddi as of now. Hooda has 856 raid points to his name that he scored in 123 matches. He is also the only all-rounder to make it to this list of top PKL raiders.

With 790 raid points in 115 matches, Ajay Thakur is the fourth-highest-ranked raider of Pro Kabaddi. Thakur is also the current captain of Tamil Thalaivas but hasn’t had much success in this role. Before Thalaivas, Ajay Thakur was a part of Bengaluru Bulls and Puneri Paltan till the fourth season.

Bengal Warriors’ current captain Maninder Singh is the fifth player to make it to the list of most raid points in Pro Kabaddi. Maninder scored 731 points in his PKL career of 79 matches one of the best averages in this league. He made his debut in the inaugural season of this league.

Bengaluru Bulls’ star raider Pawan Kumar Sehrawat has 682 raid points to his name in just 80 PKL matches. Sehrawat also holds the record of scoring the most points (39) in a single match. He emerged as the number-one raider in the past two seasons of Vivo PKL.

Another player from the Bengaluru Bulls appears in this list and this time, it’s their skipper Rohit Kumar. Kumar, who is at the seventh spot in the list of most raid points in PKL, made his Pro Kabaddi debut with Patna Pirates in 2016. After playing for one season with them, Rohit moved to Bengaluru. He also has a unique record to his name which is of scoring 100 points every season.

At number eight is UP Yoddha’s ace raider Rishank Devadiga with 624 points. Devadiga’s most impressive performance came during his match against Jaipur Pink Panthers in season 5. This was also his first game as the captain of U. P. Yoddha and he scored 28 points for his side.

Kashiling Adake of Bengaluru Bulls has the ninth-most raid points in PKL history. With 561 points, Adake is also the third-most successful raider for the Bengaluru-based franchise. He was the top raider of Pro Kabaddi season 2 with 114 points and played for Dabang Delhi K. C. and U Mumba in the previous seasons as well.

Former Jaipur Pink Panther’s raider Anup Kumar collected 527 raid points in his PKL career of 91 matches. Anup is popularly known as ‘Captain Cool’ because of his quick and smart strategies on the court. Kumar was also the highest scorer in the inaugural season of Pro Kabaddi where he collected 155 raid points for his team.