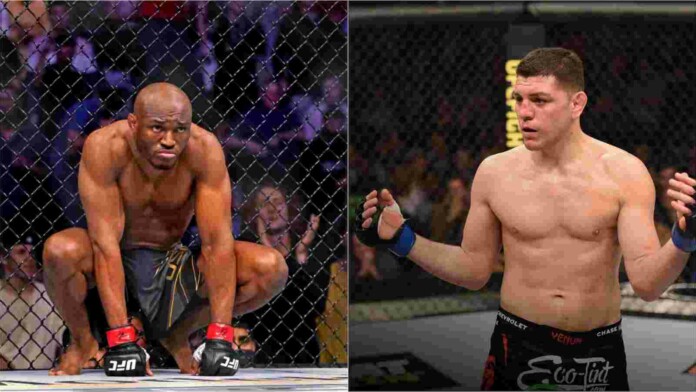 The Nigerian Nightmare’s last bout was a rematch against Jorge Masvidal at UFC 261 in front of Gamebred’s people in Jacksonville, Florida. This was the first fight with a full audience after the pandemic hit the world. The audience was expecting a great main event fight and Kamaru Usman sure gave them what they wanted. After knocking out Jorge, fans are eager to know who Usman will fight next.

Recently, Kamaru appeared for an interview with TMZ Sports. In the interview he was asked if he was open to fight MMA legend Nick Diaz who claims to be returning for a fight having met with UFC president Dana White. Though, White is more interested to matchup Diaz with Khamzat Chimaev for the return fight. But Kamaru Usman signals that his doors are always open.

Kamaru Usman thinks the fight will be fun against Nick Diaz

Kamaru Usman was asked if he would reject the Diaz fight given that he has taken a long break from the sport and we don’t know if he would make it to the level Usman is at currently. But the champ doesn’t want to discredit the veteran. “We don’t know (how Diaz is going to look)”, Usman told TMZ Sports.

“At the end of the day, if he got everything in order and he’s able to compete, that’s always a fun fight. Nick Diaz. Imagine, Nick Diaz at the top of the bill once more. Nick Diaz fighting for the title. That’s a humongous fight. Hopefully gets his faculties and everything in order, and if he’s able to do that, Nick is able to come in and do something spectacular… Of course, that’s always a fun fight,” the Nigerian Nightmare said about Nick Diaz.

Also read: The Diego Sanchez and UFC saga: Everything that happened between the veteran fighter and the fighting company