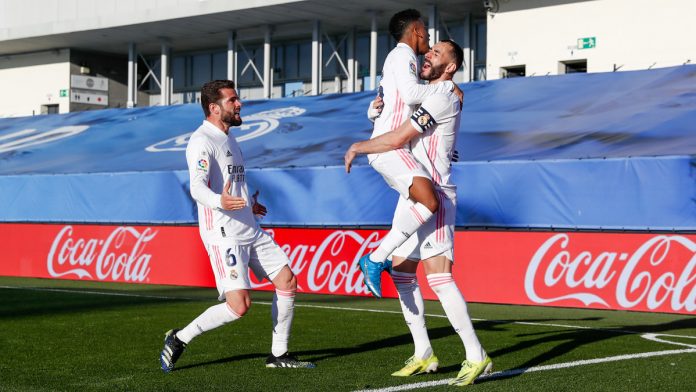 Real Madrid continued their unbeaten run in La Liga with a last breath comeback 2-1 win over Elche. Karim Benzema scored a brace for the Los Blancos as it capped off a pretty average performance from Real.

Elche took a shock lead just after the hour mark with a bullet header from Dani Calvo. Both Elche and Real Madrid had strong penalty claims waved away by the referee in a close game.

Zinedine Zidane rung in the changes for Real Madrid keeping in mind the mid-week Champions league fixture against Atalanta. Toni Kroos, Modric, Asensio and Rodrygo all started on the bench as Sergio Ramos returned to action after a lengthy lay-off.

Elche defender Dani Calvo headed the visitor in front in the 61st minute at Alfredo Di Stéfano Stadium. Madrid coach Zinedine Zidane threw midfield duo Toni Kroos and Luka Modric on immediately after the goal. The change paid off when Kroos played a short corner to Modric and the Croatian fed Benzema, who barely had to jump to head home in the 73rd minute.

Karim Benzema turned Madrid’s saviour when he scored in the 91st minute of the match from a left footed volley from outside the box. Yet again, Madrid’s perseverance paid off as they pipped 16th placed Elche to grab all 3 points.

“It wasn’t an easy game against a team that was well organised. We know that we have to make an extra effort to get to the top of the table,” Benzema said after taking his team-high tally to 20 goals in all competitions this season.

Anshuman Mahapatra - June 13, 2021
Milkha Singh's wife Nirmal Singh has succumbed to COVID-19 infection. The couple was admitted last week after a drop in their oxygen levels. While...