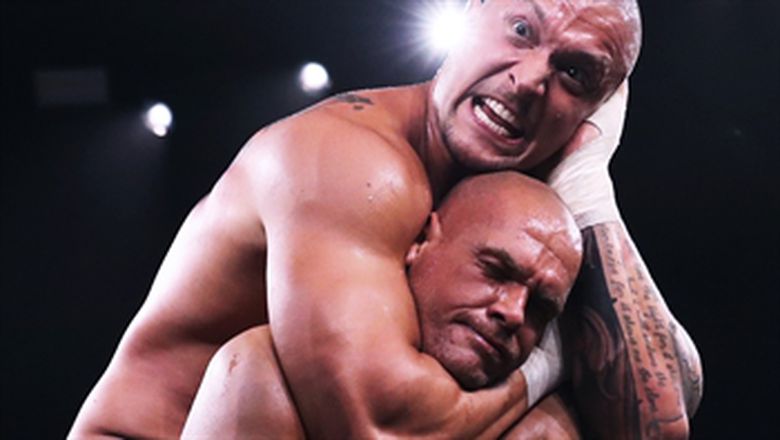 Karrion Kross was caught off guard by a running dropkick from Danny Burch. The British Brawler took the fight to the big man, sending him to the floor with a series of rights and headbutts.

However, Kross quickly recovered and dragged Burch to the outside, dropping him on the floor with a choke toss.

Back inside the ring, an exploder suplex sent Burch across the ring. In the corner, Burch stunned Kross with a step-up enziguri and took him down with a diving dropkick and German suplex.

Still, Kross easily shook it off, standing right back up.

Burch was rocked with an elbow but responded with another German suplex. Kross stood up again, but a big clothesline finally laid Kross out….at least momentarily.

Though he was locked in the crossface, Kross stared down Burch before standing up with Burch in his arms, turning it into the Doomsday Saito.

A second one dumped Burch on his head, and the Executioner of NXT probably could’ve ended it there. Burch had a hard time standing up but managed to catch Kross with one final punch.

Still, that was all he had left, and Kross quickly put him down with the Kross Jacket.

Keith Lee’s music hit immediately after, contract in hand. Kross and Scarlet left the ring as soon as Lee entered, which Lee knew he’d do.

Lee called him a little b****, before revealing that he’d begged and pleaded to get this match done with NXT GM William Regal.

Scarlett grabbed it and handed it to Kross, who signed it without breaking eye contact with the NXT Champion.

Scarlett sealed up the contract and slid it back to Lee, but when Lee opened it he was met with a fireball.

Several officials came down to try to assist Lee, who was seemingly blinded by the attack.