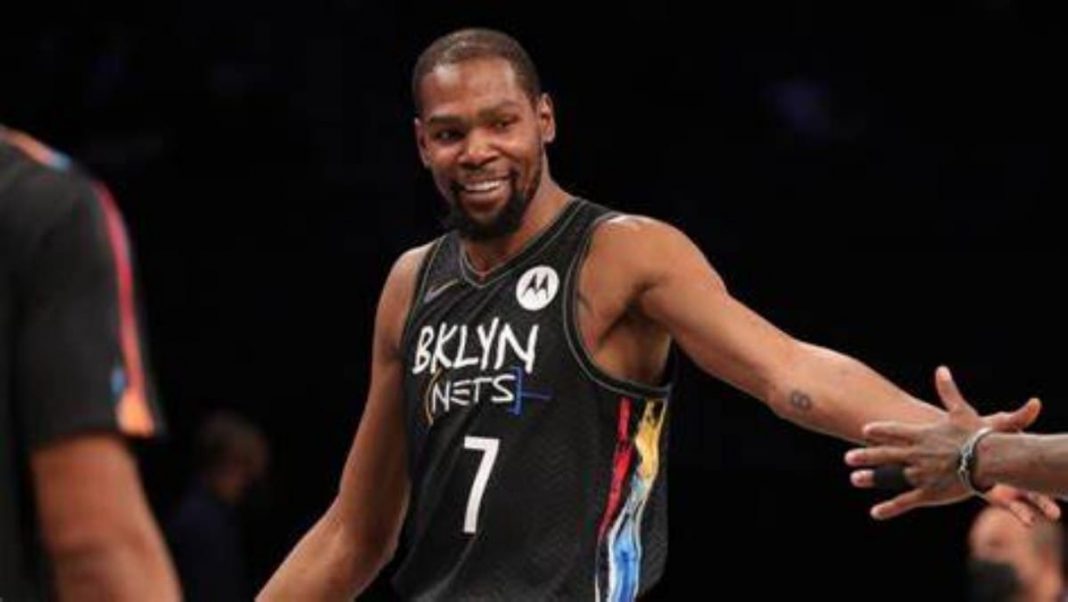 After a long gap and recovery session, Kevin Durant is finally back to the squad. The Brooklyn Nets were deprived of their star forward since 23 games. However, he finally stepped up on court today against the New Orleans Pelicans. Even after being rested for such long, Kevin Durant was back with the same mentality as the team won by 28-points. Kevin Durant revealed his elite mentality after making a comeback from the injury.

Durant came off the bench in the 2nd quarter. As he stepped on the court, he was cheered up by the meagre number of crowd present in the arena. Durant was given a huge applause by his mother who specifically came over to see KD get back to the thing he loves. Nets ended the game 139-111 against the Pelicans. Zion Williamson was contained with a good defense while Eric Bledsoe was the only player who scored 20+ points. Kevin had 17-points with his 19 minutes on court. He was 5-5 from the field. Kyrie Irving was the highest scorer on nets squad with 24-points.

Durant said, “I expected to come out here and play the way I played. I wasn’t trying to ease into the game. Just wanted to go out there and dive right into the action. The game was fast-paced already, so watching it from the bench, I knew exactly how to approach it.”  KD’s return is a great news for the team.

Durant knew what his body was capable of and made the most of it. While other players are cautious of making a comeback from an injury, KD didn’t seem to bothered about it.

The Brooklyn Nets are on the top in the Eastern Conference. They are closely followed by the Philadelphia 76ers for the top spot. Nets are currently running on a 36-16record and have emerged to be the fan favourite to the title. As James Harden is out Durant’s entry has become a huge boost for the rest of the squad. Hopefully the super team assembled fulfil the dream of getting to the title this season.

“Cleared”: Anthony Davis given green signal to be back at practice by doctors

“It is an honor”: Vince Carter reacts to Kevin Durant calling him his favorite player

Nevin Clinton - April 16, 2021
Chennai Super Kings' (CSK) bowling in their first match against Delhi Capitals (DC) was not up to the mark at all and the bowlers...

Nevin Clinton - April 16, 2021
Chennai Super Kings (CSK) would want to bounce back from the defeat in their first match as they face Punjab Kings (PBKS) today in...

‘Without a doubt I would beat him’ – Canelo Alvarez on...