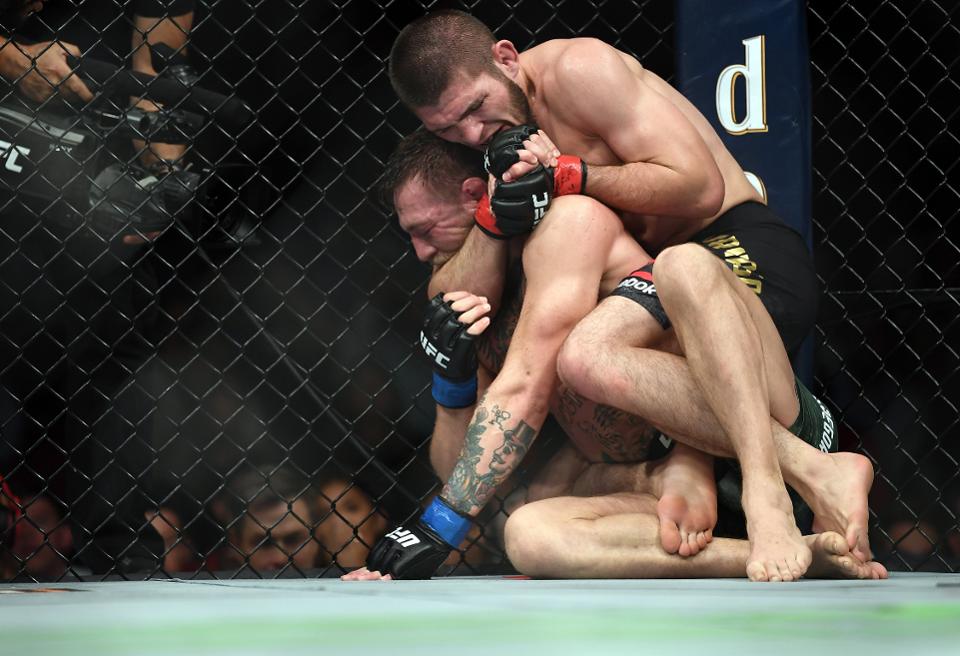 Khabib Nurmagomedov represnts the greatest force in the world of UFC, while McGregor is definitely the most popular and accomplished Fighter in the UFC. The two met once in 2018, what was termed as the greatest fight in the history of UFC where Nurmagomedov emerged Victorious over McGregor.

If one were to make a list of the greatest fights of all times, then “McGregor vs Khabib” would definitely be there amongst the likes of the famous “Floyd Mayweather, Jr. vs. Manny Pacquiao, Brock Lesnar vs Mir, McGregor vs Diaz, Muhammad Ali vs Joe Frazier, George Foreman vs Muhammad Ali, “Sugar” Ray Leonard vs Roberto Durán II”.

Dubbed as the “The Greatest fight in the history of UFC”, the bout happened between the undefeated current champion Khabib Nurmagomedov and former featherweight and lightweight champion Conor McGregor at the UFC 229, on October 6, 2018.

The event drew an attendance of 20,034 fans, generating a live gate revenue of $17.2 million. It set the record for the highest ever mixed martial arts attendance and live gate in Nevada. It also set the record for the biggest MMA pay-per-view event, with 2.4 million buys in the United States. But this is not the only reason to remember the fight for, for the outside ring Trash-Talk between the Two fighters was rather brutal, with the “Notorious One” even dissing “The Eagle’s” religion and Father.

Nurmagomedov eventually won the bout in about 3 minutes and 4-rounds when the Notorius submitted to the “neck Crank” by “The Eagle”.

The post-match controversy also included Khabib charging McGregor’s cornerman Dillon Danis. Soon after, McGregor and Abubakar Nurmagomedov (cousin of Khabib) also tried to climb out of the octagon, but a scuffle broke out between them. Back in the octagon, McGregor was then attacked by two of Nurmagomedov’s cornermen: Zubaira Tukhugov and Esed Emiragaev.

Two years later, “The Eagle” is still undefeated while the “Notorious One” is enjoying Retirement, Discussion lies around whether who would win if the two were to go Head to Head again.

The first thing that one would state is that given Khabib is in the business while Conor is out on Retirement, Khabib has a better chance, also reflecting on how McGregor was dominated last time. But one can never underestimate the Notorious MMA given the history speaks in his favor behest his Dominating Victory over Nate Diaz in the Rematch.

Khabib Definitely has the Genetics on his side given he was raised as bear Brawling fighter, but above all his main strength lies in Submission holds. He is #2 in pound for pound and doesn’t hold back his blows even if the Opponent is blocking most the hits. But what is really amazing is the way he can score Victories over some of the best fighters like Poirier and McGregor by making them tap out. So definitely, McGregor will have to come up with a strategy to avoid getting into a compromising position while also somehow dodge the lightning-fast combos. Grappling is also something where “The Eagle” has an advantage given experiences from the Combat Sambo Championship. McGregor has to prevent being “Mauled” by the Russian Bear.

McGregor on the other hand has an advantage in terms of Experience of the Big Money Rematch. McGregor was probably the first Superstar of MMA whom Khabib conquered because, by the time khabib arrived on the scene, McGregor had devoured the Legacy of any fighter that stood in his Path. Also, the way McGregor handled that Rematch against Nate Diaz speaks for the Irishman’s abilities.

He isn’t Far when it comes to Pound For Pound trashing with a #4 in the UFC. The former two Division Champion is also known to have stung the World’s strongest Man “ and the Game of Thrones “ The Mountain”, like a Bee. If khabib can cause trouble with his blows, so can the Irish fighter.

Being a follower of the South Paw Stance, McGregor’s best weapon is his left cross. Boxing being his best Skill, along with the maturity he has attained through experiences with the like Floyd Mayweather Jr.

Who will win the rematch ??

Though it is rather difficult to predict who would win the rematch, the stats as well the facts favor Khabib given he seems to have Advantage on the ground, in submission holds and Grappling while both are matched when it comes to Pound for Pound ranking.

However, one also has to see whether how “The Eagle” will re-emerge from the Aftermath of the sad demise of his father who was his Coach/Mentor as well.

“They just made one of the worst mistakes,” Kevin Lee reacts to his release from the UFC.