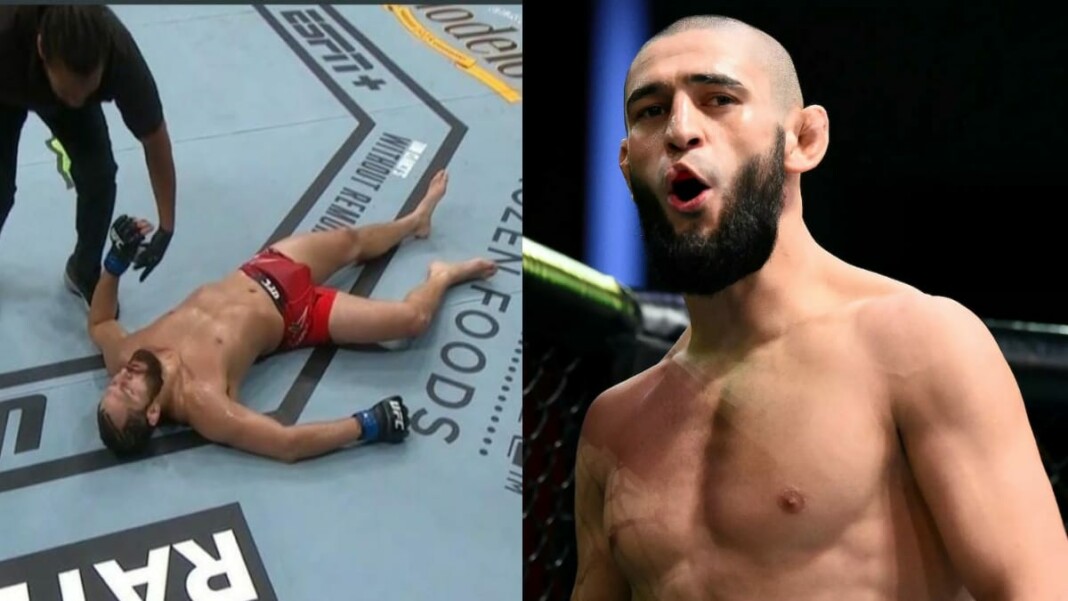 Welterweight’s undefeated fighter Khamzat Chimaev is keen to wake up Jorge Masvidal for a fight after he was knocked out by Kamaru Usman at UFC 261. Chimaev has not fought in the octagon for more than 6 months. The fighter lost fought in the September of 2020.

Khamzat Chimaev has recently been running his mouth and talking a lot of sh*t to the top-ranked fighters on the UFC roster. It has gone to an extent where he even called out UFC light heavyweight champion Jan Blachowicz. The fighter said he is ready to take on anybody even if it is Jan or Israel Adesanya who is the middleweight champion in his last interview.

After the UFC 261 event went down, Khamzat went out on Twitter to call out the loser of main event, Jorge “Gamebred” Masvidal. Jorge went up against reigning welterweight champion Kamaru Usman. The Florida fighter lost by Knockout in the second round. Khamzat wastes no time in calling him out.

In the tweet, Borz wrote, “Tell gamebred when he wake up from Saturday night I will fight him in August I’m not sure if he still sleeping.” He has got a backlash lately for calling fighters out but the Swedish national doesn’t seem to care.

Khamzat Chimaev though he hasn’t fought any top-ranked fighters, he is still undefeated in his professional career. His first ranked opponent was going to be Leon Edwards. That bout was finally called off and Leon was asked to fight Belal Muhammad instead. Khamzat is slowly recovering from his COVID struggles and is looking to step into the ring before September.

Jorge Masvidal on the other hand got his second shot at the title which he blew. Kamaru Usman showed complete domination and put Masvidal to sleep in the most unexpected fashion. Many fans believe that Jorge’s hype train that built when he knocked out Ben Askren under 5 seconds got him the title fight.

Do you think Khamzat and Jorge Masvidal in a welterweight bout makes sense?

Also read: “I can beat Blachowicz too,” boasts Khamzat Chimaev that he can beat the light heavyweight champion if he wanted

Conor McGregor net worth revealed – Can the UFC star buy Manchester United as he claimed?