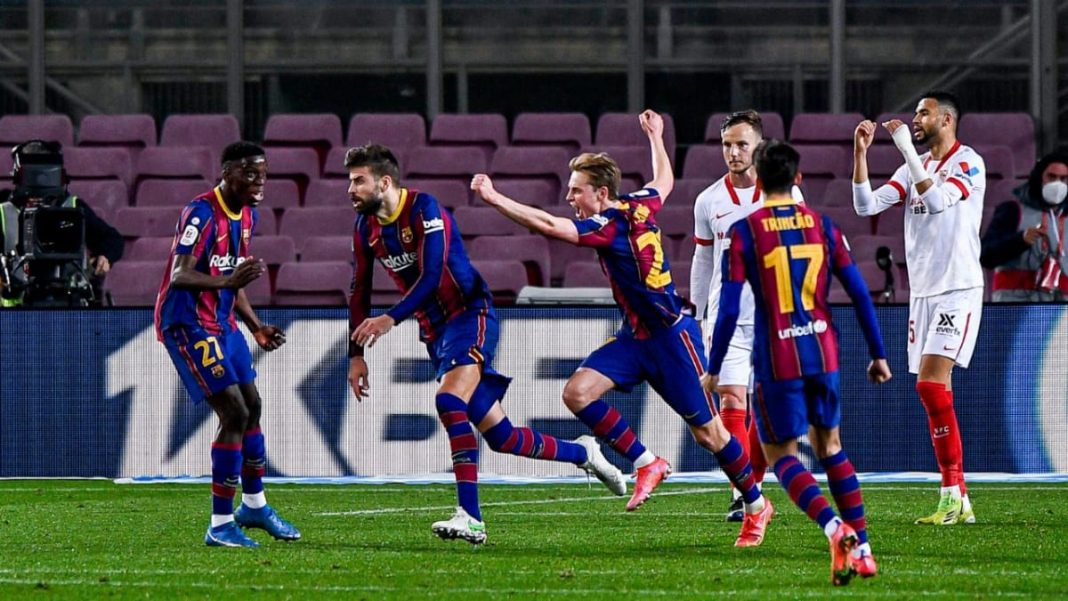 FC Barcelona produced a ‘remontada’ against Sevilla in the 2nd leg of the Copa del Rey semifinals. They defeated Sevilla 3-0 in extra-time to overcome the 2-0 first leg deficit.

Goals from Dembele, a 94th minute equalizer from Gerard Pique and the winner from Brathwaitte helped Barcelona into the finals of the Copa del Rey. Ter Stegen saved a 2nd half penalty to deny Sevilla the opportunity to make a come-back into the fixture.

Ronald Koeman sounded very pleased with Barcelona’s fight back and the mentality shown by his men in his post-match press conference.

“We fought to the point of exhaustion, we deserved the victory, we were better in both games, I am very satisfied. We were lucky in the last minute, but the team did well until the end, they believed and we deserve victory.

“The team is very strong physically and mentally. You have to fight, you have to create opportunities, you have to have the ball. What the team has done is incredible.

“We must highlight the ambition of the team, we have always believed in coming back. It is a mentality that we are improving and as a coach I cannot ask for more than what I have seen tonight.”

Barcelona need to produce a similar comeback against PSG in the Champions league. They currently trail 4-1 after their first leg defeat at the Camp Nou. When asked about Barcelona’s chances of a ‘remontada 2.0’, Koeman was quick to cool off the pressure on his team.

“PSG have a great team and great players. We will start the game to win, to see if there is a chance to go through.