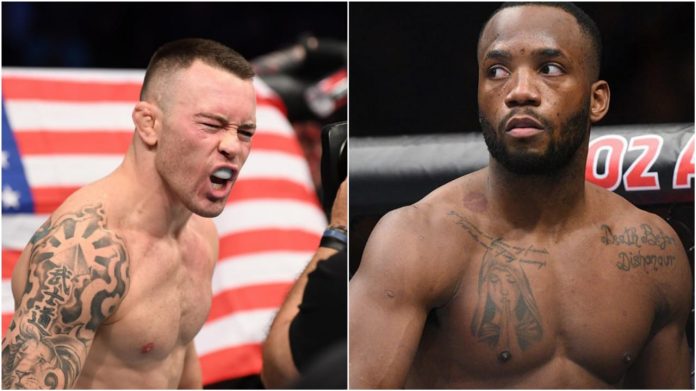 Leon Edwards is set to face the returning Nate Diaz on the 15th of May, 2021 in the co-headliner of UFC 262. The number 3 ranked welterweight is coming off a controversial (no-contest) eye poke against Belal Muhammad at the UFC Fight Night, last month. The Birmingham man will be looking forward to stabilizing his position as a top-ranked welterweight, come the 15th of May.

Elsewhere, Colby Covington, the number 1 ranked welterweight has been taking a jibe at Leon Edwards from time to time. Speaking in an interview with Ariel Helwani of ESPN MMA, in Helwani’s MMA show, Leon Edwards had little or no respect for ‘weird’ guy Colby Covington. He condemned Covington’s adamant habit of waiting to fight only if he is given a title shot.

Leon Edwards was quoted as saying, “It’s because man is weird. I don’t think you understand, he is a weird man. I don’t know, he says he wants to wait, he’s waiting for a title shot. He feels he was winning the Usman fight…He’s not willing to fight no one in the top 5 until he gets a title shot… I also believe you have to work for what you want and that’s my position.” [H/T FirstSportz]

Colby Covington, last fought Tyron Woodley in September 2020, beating him via. TKO. Since then Covington has called out a number of opponents viz. Kamaru Usman, Jorge Masvidal, but never seemed interested in taking on Leon Edwards.

Barring one DQ loss, Leon Edwards just has two decision losses to his name, and Colby Covington must be wary of that. It is not easy finishing the Jamaican native.

Will we ever see Leon Edwards vs Colby Covington?