Kamaru Usman and Jorge Masvidal will be running their UFC 251 fight back, this month at UFC 261. Their last meeting saw a one sided unanimous decision victory for Kamaru Usman, as Masvidal struggled to out-strike and outwrestle ‘The Nigerian Nightmare’. And, Kamaru Usman, has vowed to finish Jorge Masvidal for good this time around.

Speaking about this highly anticipated rematch in an interview with Ariel Helwani of ESPN MMA, number 3 ranked welterweight Leon Edwards gave his prediction, saying that he would put his money on Kamaru Usman. ‘Rocky’ had quite a lot of reasons to justify why he picked Usman over Masvidal.

Leon Edwards was quoted as saying, “If I had to put money on it, I’d probably favour Usman. I just can’t see what Masvidal could do different. He’s the smaller man, he doesn’t look strong in the clinch. His wrestling isn’t great. I just can’t see what he does that’s gonna be amazing to switch up his style. He’s fought the same way for a long time.” [via BJPENN.com]

Kamaru Usman, is coming off a victory against his former teammate Gilbert Burns at UFC 258, via a third round knockout. He thereby went past Georges St-Pierre’s record for the most consecutive wins in the UFC. Prior to that, Usman fought Masvidal at UFC 251.

Jorge Masvidal, on the other hand, hasn’t fought since UFC 251. He had agreed to fight Usman on extremely short notice after Gilbert Burns had pulled out due to contracting COVID. He believes he can beat Kamaru Usman this time, since he will be having a full training camp. 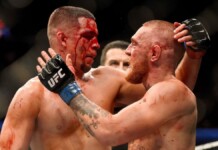