The Deep Dark was supposed to arrive in the Caves and Cliffs update Part II but was pushed back to the next one. It involved the introduction of the Sculk blocks and infestation and also the much awaited Warden. However, these features are all set to be revamped and much more will be added along with the Ancient Cities and new Sculk blocks.

List of every Sculk Block in Minecraft The Wild Update

Sculk is supposed to be the new infestation and line of blocks that will appear in the Wild update. These blocks will be dark green-blue in color and can spread to other blocks as well.

In the pictures, we see some Soul Lanterns and Redstone Lamps decorating the cities and providing light. Other than these we see 3 new Sculk blocks populating the ground of the Cites.

Players can also break the Sculk to get EXP.

The Sculk Sensor introduces a new mechanic in the game called Vibrations. The Sculk Sensors will pick up any loud noises around it and emit vibration signals to the Warden and the Sculk Shriekers.

Finally we have the Sculk Shriekers which will pick up the vibrations from Sculk Sensors and emit loud noises. This will also lead to the lights around the player flickering for a while.

If the Sculk Shriekers is triggered too many times, the Warden will be summoned from underground. This will also apply the Darkness effect on the player for 25 seconds. 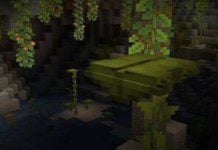