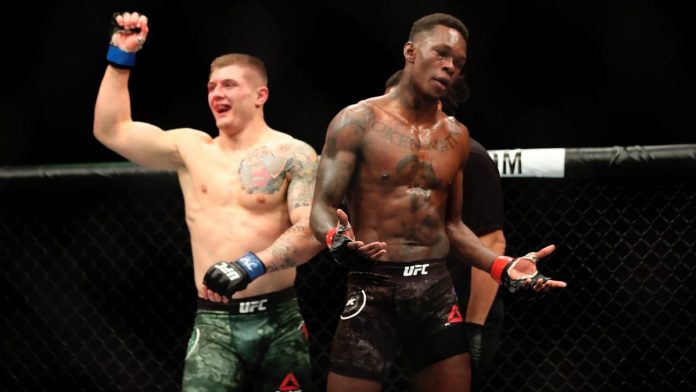 Marvin Vettori put on an absolute clinic as he completely outclassed and outwrestled Kevin Holland in the main event of UFC on ABC 2. The number 6 ranked middleweight executed a whopping 11 takedowns throughout the course of the match (a middleweight record) as Kevin Holland had no clue whatsoever to defend his takedowns. The Italian won via. unanimous decision with all three judges scoring the contest 50-44.

At the post-fight interview with Daniel Cormier, Marvin Vettori expressed his desire to fight the ‘Last Stylebender’ Israel Adesanya. The Italian justified that he deserved that fight, since he has been on an impressive win streak. It is to be noted that Marvin Vettori has never been finished in his career.

Vettori was quoted as saying, “I want Adesanya next. And I will improve by then, for the next fight. That’s for sure. And October I wanna fight him. I think I deserve it. I have the longest win streak right now… And now I’m on a winning streak like I said. I put on winning performances. Dominant performances. I want this title man!” [H/T FirstSportz]

Adesanya and Vettori have already fought once in 2018. Many believe that is the only fight Adesanya almost lost in the middleweight division. Adesanya won the match via. split decision. So, the pressure might be on the Nigerian to accept the fight. However, Darren Till is the one Adesanya has been targeting. If at all a fight between Till and Vettori happens, and Vettori manages to beat Till, a fight with Adesanya will be inevitable.

Well, Vettori sure does deserve a title fight. Given the way he has been performing, it is hard to deny the tough-as-nails Italian a title shot. What are your thoughts on this? Who should Marvin Vettori fight next?