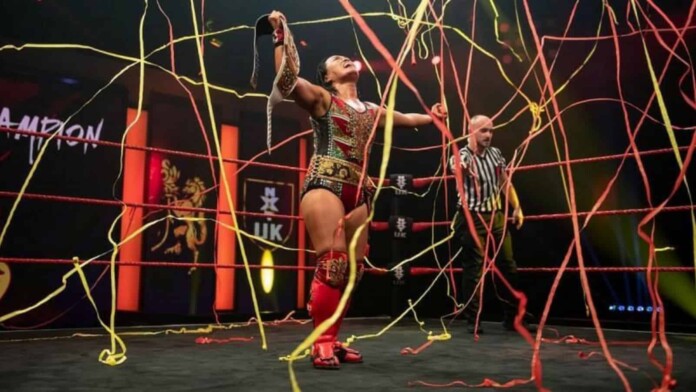 With this victory, Satomura became the 4th woman to be awarded the prize in WWE’s UK Women’s division. An emotional Satomura was seen celebrating her win inside the ring with the belt with multicolored streamers pouring down on her. WWE twitted the result from their official handle which shows Satomura holding and looking at her gold, down on the knees.

Satomura, who is known for her Death Valley Bomb finish, is a superstar every young wrestler looks up to and wants to defeat in the country of Japan. The dethroning of Kay Lee Ray by Satomura deserved the presence of the fans but the circumstances do not make the moment less special for the 2018 Mae Young Classic participant. It has not been many days since the NXT UK Women’s Championship has been introduced but it falls under the bracket of one of the most prestigious titles in the WWE.

The title after its introduction in 2018, was first held by Rhea Ripley who is now the current RAW Women’s champion. She defeated Toni Storm in a tournament final to achieve the feet but the latter got her hands back on the gold in 2019 securing a victory against her rival. It was Kay Lee Ray next to hold the prestigious belt when she got the better of Toni Storm at NXT UK TakeOver: Cardiff that same year. But Kay’s reign was mostly during the pandemic which forced her to defend the title 8 times in 649 days. During her reign, she had successfully defended her title against Piper Niven, Jinny, and Meiko Satomura. But this time when Satomura and Kay Lee Ray locked horns, the latter ended up in the receiving end.

The match was a tight one between the two superstars with Satomura starting off in an aggressive fashion with repeated kicks. KLR rolled to ring-side to avoid the strikes but Satomura was not to stop. KLR somehow fought back with super-kick and got back inside the ring. It was from that very moment KLR took control of the match with a knee drop, a chin lock, and a punch-out off mid-air.

The final stages of the match were even more interesting as Satomura applied a sunset bomb on KLR but only for a count of two. Satomura then hit KLR with a Pele Kick but the defending champion locked in a triangle-esque submission of the pinfall attempt. Satomura got back up and stunned Kay with a Death Valley Bomb followed by a Scorpio Rising which marked the end of the reign for Kay Lee Ray.

Also read: Has WWE signed this wonderful and legendary wrestler?