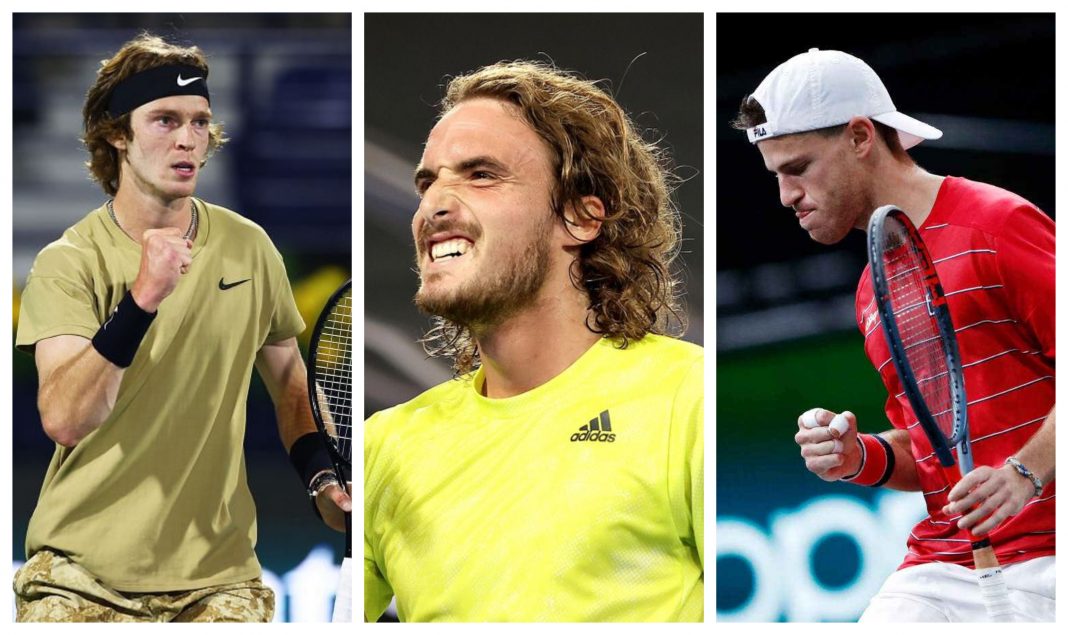 Day 6 of the Miami Open saw the Round of 32 matches of the remaining top seeds. 2nd seed Stefanos Tsitsipas had to dig deep while in form Abdrey Rublev took his revenge within an hour.

Greek second seed Stefanos Tsitsipas defeated Japanese 28th seed Kei Nishikori 6-3, 3-6, 6-1 after an hour and 56 minutes to reach the last 16 of the Miami Open. Nishikori reflected his best form in the second set but the Greek lord was too much for the Japanese. Tsitsipas will next face Italian 24th seed Lorenzo Sonego.

After the last match between Marton Fucsovics and Andrey Rublev, Fucsovics told the Russian he didn’t want to play him again this year. On Monday, we saw why.

Rublev defeated the in-form Hungarian 6-2, 6-1 in 52 minutes to reach the Round of 16 at the Miami Open. The fourth seed leads the ATP Tour with 18 victories this season. The two have met 4 times in the last 4 tournaments, with the Hungarian winning the first time while Rublev bagging a win the last 3 times.

Schwartzman moves on as he defeats Mannarino

Over the past seven seasons at the Miami Masters, the Argentine had never made it to the fourth round of the competition, but that is now history as Schwartzman defeats Adrian Mannarino 6-1,6-4 to reach the last 16. He will next face Sebastian Korda in the Round of 16.

For only the third time this year, Australian Open semi-finalist and Dubai Tennis Championships winner Karatsev tasted defeat following a 6-3 6-0 loss at the hands of Korda.

Sixth-seeded Denis Shapovalov of Canada was upset by 26th seed Hubert Hurkacz of Poland 6-3, 7-6 (6) on Monday at the Miami Open. Shapovalov was clearly frustrated with some calls that the Hawk-Eye Live technology- the system that replaces live lines judges with cameras- saw one way and he saw another way.