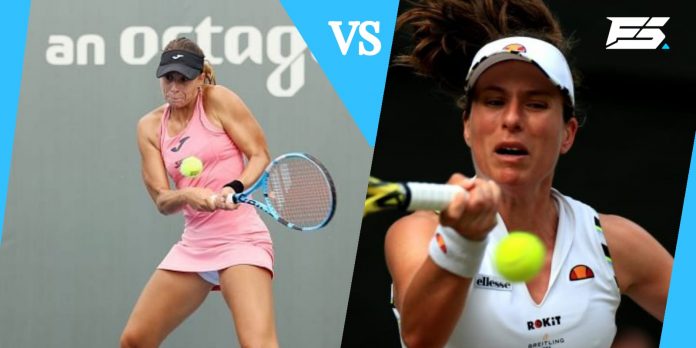 Magda Linette will be playing Johanna Konta in the 2nd round of the Miami Open 2021. Linette, the Polish player is currently ranked No. 50 in the world whereas British player Konta is ranked 18 in the world.

The Miami Open 2021 will be the first tournament for Magda Linette of the year 2021, having last featured in the WTA 500 J & T Banka Ostrava Open 2020 that was held in October. February, 2020 also saw Linette win the Thailand Open, her 2nd title, but since has made early exits in the tournaments she has appeared.

Johanna Konta, world rank 18 and the 17th seed at the Miami Open 2021, started her 2021 in Australia playing the Gippsland Trophy, Australian Open and Adelaide International, facing defeats in all the tournament. She had to pull out in the second set of the first match at the Australian Open due to an abdominal injury.

Linette won her first round in the 3rd set against Robin Montgomery winning 6-1 3-6 6-0, Konta got a bye in the first round giving her automatic qualification for the 2nd round.

For both the 29-year olds, this will be their first ever meeting on the tour, hence the head-to-head record is 0-0.

Konta is known for her baseline play, hitting fast and flat shorts, has the ability to hit the winners from any angle on the court. Although she prefers to play on the grass, hard courts have brought more success to her.

Linette has not featured in 2021 yet, and had to go to the final set in her round 1 victory, which may go against her in the match with Konta who is seeded 17th in the Miami Open 2021.

Prediction: Johanna Konta to win the match in straight sets.