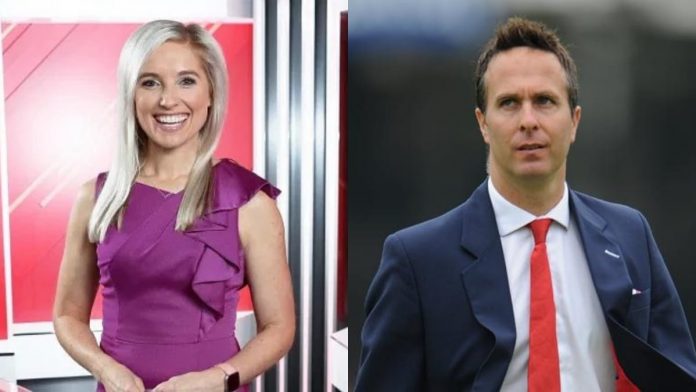 Michael Vaughan has constantly been in the limelight for quite some time now after the beginning of England‘s tour of India. The former English captain has not shied away from expressing his views on the happenings of the tour in support of the visitors. He has gone about blaming the pitches in the tour and has also belittled the Indian team, especially the T20I outfit, stating that the Mumbai Indians are a better team than them.

Also Read: India vs England 2021: “I had a chat with him” – Virat Kohli reveals AB de Villiers’ advice before second T20I

He has been at the receiving end of a lot of retorts from fans not only in India but around the world as well. He got one such reply yesterday when Australian journalist Chloe-Amanda Bailey who is quite popular among the Indian fans trolled him with a reply for his tweet during the second T20I that India won to level the series thanks to half-centuries from Ishan Kishan and captain Virat Kohli.

During the 8th over of India’s innings when the hosts were going strong, an easy chance presented itself to England when Ishan Kishan hit Adil Rashid straight to the long-on fielder, Ben Stokes. The all-rounder who is known for his excellent fielding ability could however, not hold on to the catch as the ball popped out of his hand. Stokes was not able to hold on to the rebound as well.

Meanwhile, before all this had happened, Michael Vaughan had taken a jibe at India’s fielding displays by tweeting, “I am inviting all the Indian Team to join my Fielding academy… it’s a very exclusive club. (sic)” Soon after Ben Stokes dropped his catch, the Indian fans took to this tweet to troll Vaughan back.

Chloe Amanda-Bailey too joined in and wrote, “Lol Ben Stokes (sic).” This tweet by the Australian has been well-received by the Indians who have echoed her feelings.