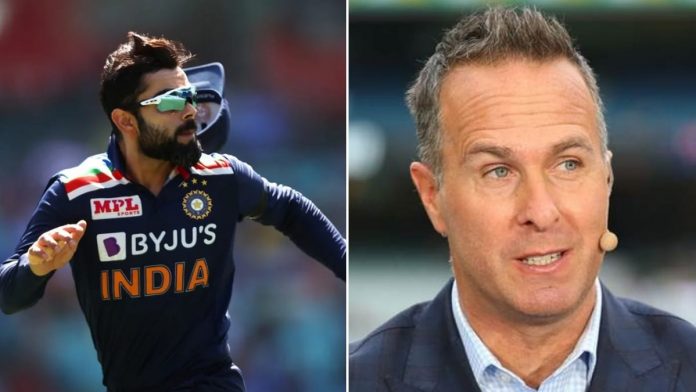 India were comprehensively beaten by a top notch England side in the first T20I of the five-match series in Ahmedabad yesterday. It all went downhill for the hosts right from the very beginning as they never got going in the match. Ever since KL Rahul got out in the second over, it only kept going more and more awry. It was Shreyas Iyer who took India to a respectable score with a terrific knock.

Indian skipper Virat Kohli was dismissed for a duck to add to his form woes as he holed out to mid-off off Adil Rashid‘s bowling. Kohli has already got out for a duck thrice in this tour and his form is now becoming a genuine concern for India. They would want their talisman to come good in the upcoming T20Is in order to resurrect India’s series and to also hold them in good stead for the ICC T20 World Cup later this year in India.

Former England captain Michael Vaughan spoke to Cricbuzz about Virat Kohli’s form and said, “For India to get those big scores, be really effective, and go on to win the T20 World Cup, it will serve the team better if Virat is just a little bit selfish. A little bit more selfish in the first few deliveries, gives himself ten balls to get in. Even if he leaves out 3-4 balls in that, you know a couple of boundaries, and he will be on his way.”

“I never get concerned with Virat’s batting because he never looks, in terms of movements, that he is out of form. But something will be triggering in that mind that is quite not right at the minute, but he’s only 10-15 balls away from being back to the Virat Kohli we know. He just doesn’t have to take too many risks too soon when he goes out there in the middle,” Vaughan further said.

The second T20I takes place tomorrow at the same venue.