Indian weightlifter Mirabai Chanu‘s hopes of winning a medal at the Tokyo Olympic Games has been given a big boost after North Korea announced that it was withdrawing from the Games. This is because the fourth-ranked Chanu’s close competitor in the 49 kg category is third-ranked Ri Song Gum who won’t take part due to her being from North Korea. Gum was the one who had finished 3rd at the World Championships in 2019 when the Indian finished 4th.

North Korea announced the decision to withdraw yesterday citing ‘protection of athletes from the coronavirus’ as the reason for the same. The decision was made at a meeting of the nation’s Olympic Committee and its sports minister Kim Il Guk where a statement was released saying, “The committee decided not to join the 32nd Olympics Games to protect athletes from the global health crisis caused by the coronavirus.”

National coach Vijay Sharma reacted to the news of North Korea’s withdrawal and the subsequent boost to Mirabai Chanu’s medal hopes and told PTI, “We are happy to hear this news about North Korea withdrawing from the Olympics. But, honestly our focus was on competing with China. At the end of the day, individual performance is most important and we will give our best in the Asian Championship next week.”

The other competitors for Chanu include Chinese weightlifters who occupy the remaining spots in the top 3 for the rankings. They are Hou Zhihui, Jiang Huihua who also holds the world record and Zhang Rong. These are the weightlifters who would be the favorites to clinch medals at the Tokyo Olympics along with Mirabai Chanu.

Chanu will be seen in action next at the Asian Weightlifting Championships which will be held in Uzbekistan from April 16 to 25. 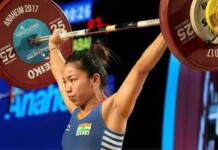 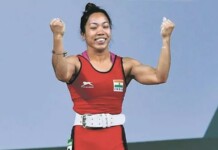 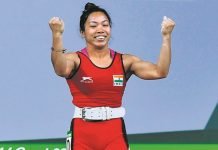 I have learned everything from Rio Olympics: Mirabai Chanu

Mirabai Chanu to train in United States for the Tokyo Olympics