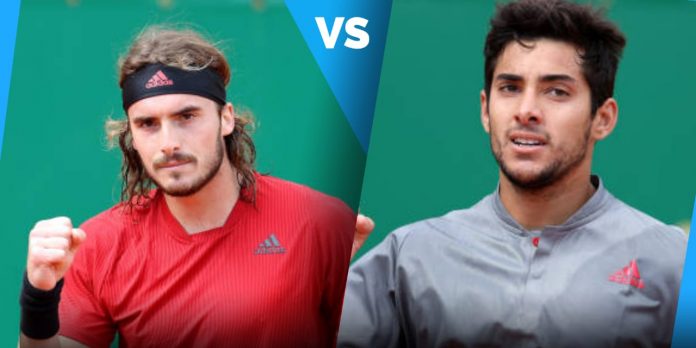 Fourth seed Stefanos Tsitsipas will take on Cristian Garin of Chile in the third round of the 2021 Monte Carlo Masters.

4th seed Stefanos Tsitsipas ousted in form Aslan Karatsev 6-3, 6-4 in the second round. Even though it was his first match on clay since his French Open defeat to Novak Djokovic last year, the Greek looked at ease right from the start.

Like Rublev, the Greek has made it to the quarterfinals at every event he played this year(excpet the ATP Cup). He is one of the most promising player on tour with 18 victories this year.

His opponent, Cristian Garin comes into this match on a six-match claycourt winning streak. In the first round at Monte Carlo, Garin defeated the talk of the town, Felix Auger-Aliassime in straight sets. He then followed it up with another straight sets victory over Australian John Millman 6-1,6-4.

This match has all the potential to be the best match of the tournament so far. Both the players are in amazing form and are fancied to go deep into the tournament.

Garin has been serving well in Monte Carlo so far and has been broken only twice. Tsitsipas, on the other hand hasn’t had his serve broken yet and would want to continue the same omen. Expect the match to go down to the very end and Tsitsipas just prevailing.