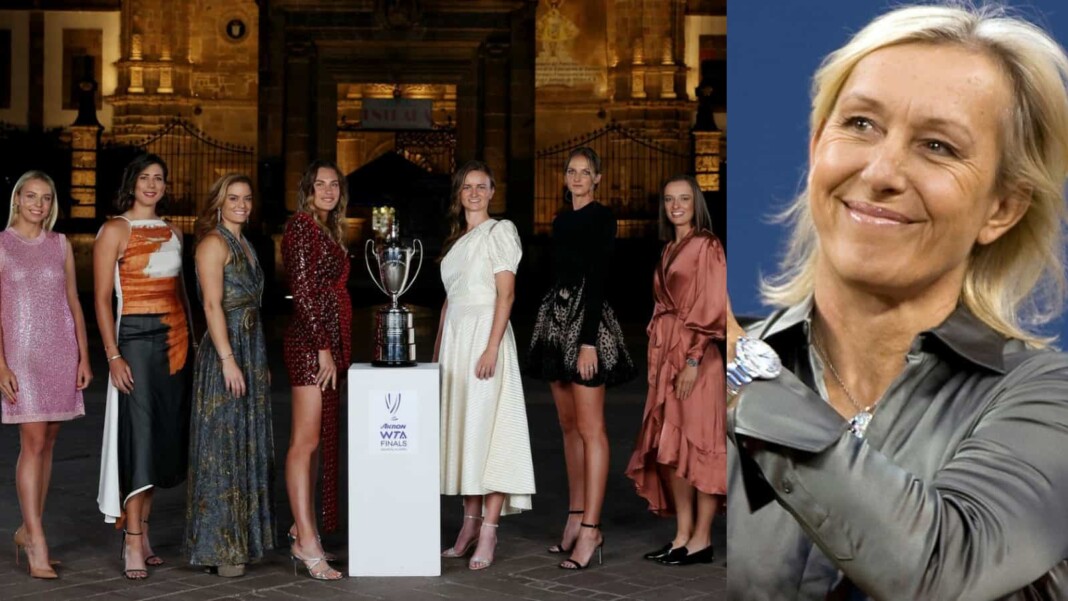 Winner of 18 Grand Slam singles titles, Martina Navratilova is one of the ambassadors of the 2021 WTA Finals taking place in Guadalajara, Mexico. Navratilova, who is widely regarded as one of the greatest tennis players, is responsible for promoting the most important event in the WTA calendar. At the press conference, the Czech-American former player indicated her favorites to triumph in the WTA Finals.

Karolina Pliskova and Garbine Muguruza are the most experienced in the field. The Czech will play for the fifth time in the Championships and the Spanish for the fourth time. However, the former tennis player and coach believes that experience would not matter on the courts in Mexico.

When asked if the two players hold an advantage over their rivals, the legend said – “I don’t think it gives them a big advantage. Muguruza and Pliskova haven’t played well in recent months and I don’t think their experience matters. It is self-confidence after recent successes that gives tennis players confidence”, Navratilova claimed during the press conference Guadalajara.

She further added – “The tennis players who have good technique will be rewarded, because in the conditions prevailing in Mexico, each mistake will cost more than usual. I think players who play more top spins will have a better chance of controlling rallies. At the same time, those that hit harder, are aggressive, will have a chance to score faster. For this reason, I bet on two names: Barbora Krejcikova and Iga Świątek.”

“If tennis players do not get used to the conditions, a brutal awakening awaits them”, stated the Czech American. Navratilova knows what she is saying because she has lived in Aspen, Colorado for 20 years at an altitude of over 2,000 meters; Guadalajara is only 500 meters below.

“The level of women’s tennis has evened out a lot,” Martina Navratilova asserted

According to the 9 time Wimbledon winner, there are two factors that will determine success in this year’s WTA Finals. One of them being the altitude at which the courts reside and the speed of the courts in Mexico.

“It is difficult to predict how the height at which the tournament will be played and the speed of the court will affect the competition,” she said. – These are the two biggest variables. The courts in Singapore and Shenzhen (previous WTA Finals location) were free. I hope that the surface in Mexico will be faster, because it will make the games better”, she further added during the press conference.

Navratilova, who was WTA world No. 1 in singles for a total of 332 weeks believes in the potential possessed by Polish star, Iga Swiatek however listing her as the favorite to win the Championship seems like a risky deal to her. “I absolutely do not take away Iga Świątek’s chances of winning the entire Championships, but putting her as the favorite seems very risky.”

The 20-year-old from Poland makes her debut in the WTA Finals and is the youngest participant of this year’s event. Since May, she has not won with her rival from the top fifteen of the WTA ranking. Moreover, in Guadalajara she will face opponents from the top three. In the group, he will play successively with Maria Sakkari, with whom she lost this year in Roland Garros and in Ostrava, with Paula Badosa, whom she succumbed to at the Tokyo Olympics and with Aryna Sabalenka, the runner-up in the ranking.

In Navratilova’s professional opinion, the level of women’s tennis has become quite homogeneous that allows a certain level of unpredictability in terms of the winner.

“In this year’s Championships, each of the participants has a chance to win, there is no clear favorite, and women’s tennis has evened out a lot. Naomi Osaka is just returning to training, leader Ash Barty has not decided to come to Mexico, and Serena Williams is closer to the end of her career than the top 10 of the ranking (41st place).”

The first matches of the Guadalajara Tournament were played on Wednesday, 10th November. In group B, Anett Kontaveit defeated Barbara Krejcikova and Karolina Pliskova defeated Garbina Muguruza in their 11th encounter on tour. On Thursday, the players from group A will start the competition – Iga Świątek will play against Maria Sakkari and later, Paula Badosa will play against top seed, Aryna Sabalenka.

Also Read: Is Iga Swiatek the favorite at Guadalajara? Read what Martina Navratilova and Chris Evert had to say