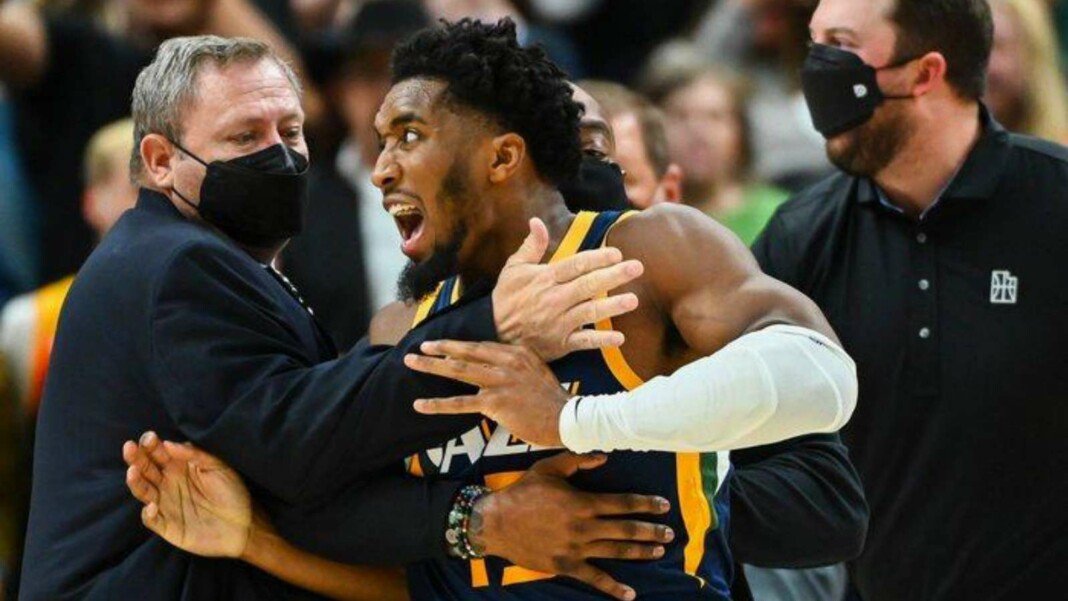 Donovan Mitchell lost his cool against the Pacers. The Jazz and the Pacers engaged in a heated clash during their match on Thursday. The Pacers and the Jazz had a close-knit match but the Jazz fell short to the Pacers and was defeated by 100-111.

What really transpired between Rudy Gobert and Myles Turner was escalated due to the lack of attention given by the referees. Four and a half minutes left o the clock till the match gets over, Rudy Gober, Jazz’s guard was fouled upon by the Pacers Myles Turner. Even though Turner did commit a defensive foul whileGobert was going to take the shot but the referees paid no heed to it.

Rudy Gobert fell down after Turner defended him mid-air but he took Turner down with him. Though Turner expressed his dissatisfaction when he raised his hand in the air and called for a foul but the referee still didn’t give any.

This ignorance of the officials led Turner to shoulder push Rudy Gobert and the rest followed its pace. Donovan Mitchell also got involved in this fight and was later ejected along with Rudy and Myles. Joe Ingles was also tossed out of the match when he forcefully shoved a referee who was trying to break apart the fight.

The incomprehension of the referees to the hostile situation can not be underlooked.

Donovan Mitchell, Utah Jazz’s significant player said, “It’s really at a point now where the refs are letting it get out of hand. Have this energy in the first quarter” as reported by Eric Walden. Mitchell further added, “Draw the line early instead of letting shit build-up.”

Mitchell also revealed that the referees told him that they did miss a lot of calls and they couldn’t do anything about them later. Mitches dropped 26 points, 5 rebounds and 4 asstss against the Pcers before getting ejected from the game.

A lot lies o the shoulders of the referees and their ignorance not for once but constantly displaying their lack of attention in a match can make teams do such ridiculous acts.

Everything also condenses to the very fact that the players need to not be hostile against each other. Basketball is a rigorous game and things happen in the heat of the moment but everyone is playing just Basketball in the end.