With the Philadelphia 76ers experiencing a shock loss in-front of their home fans at Well Fargo Center in Game 1 Against the Atlanta Hawks, yet with an anguished Joel Embiid, 76ers have looked even more dangerous. It was vital for the marquee Spanish scorer to lead his team in order for Philadelphia to make a significant comeback in this Eastern Conference Semi-Final. Once again, Joel Embiid was questionable to play shortly before tipoff due to a small lateral meniscus tear in his right knee.

Stating the same, Joel Embiid acknowledged the fact and knocked his playoff career high 40 points against the Atlanta Hawks in Game 2 to level the series at 1-1 a piece. Yet he managed to resurrect to his best, especially after being outraced by the 2020-21 Season MVP by Nikola Jokic. Embiid knocked 40 points, including five 3-pointers in 34 minutes of game time. Not only that, Joel Embiid registered 13 rebounds against his name as well.

Joel Embiid vs Hawks: How Dominant Was Embiid in 76ers vs Hawks Game 2?

To signify the bench struggle of the home team, Philadelphia’s reserves were held scoreless in the first half but came through with 26 points in the second half.

Whereas talking about the Hawks, Trae Young added 21 points and 11 assists for the Hawks. Danilo Gallinari had 21 points and 9 rebounds. While Kevin Huerter also added playoff career-high 20 points. Lastly Bogdan Bogdanovic had 14 points.

With the Game 3 action moving to Atlanta, it remains to be seen which team comes out on top in this highly unpredictable Eastern Conference semi-finals series.

Also Read: “The Clippers Are Better Than Us”: Snoop Dogg on LA Lakers… 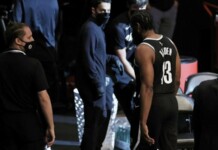 Watch: James Harden makes his way back to the roster after Brooklyn Nets move him to questionable for Game 5 a day before

2021 NBA Playoffs: Brooklyn Nets vs Milwaukee Bucks live stream – When, Where and How to watch Game 5 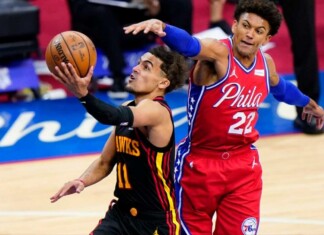