Safe to say that Jrue Holiday has been the missing piece required by the Milwaukee Bucks in the business end of a season. Having stamped his authority in Game 5 vs the Suns, Holiday was the core reason why the team was able to take a 3-2 lead vs the Phoenix Suns. Justifying his performance, Holiday was expected to help his team with a stellar show once again in Game 6 vs the Suns in-front of the home crowd as well.

But the books have surely not turned in the favor of Holiday at the start of Game 6. To bring everyone on the same page, he had a horrible start in Game 6, only making one of his 11 field goal attempts in the first half for a measly 9.1 percent. Because of this, Holiday matched Dallas Mavericks legend Dirk Nowitzki for an unwanted NBA Finals record for the second lowest field goal percentage in the opening half of an NBA Finals game in the last 25 years.

Jrue Holiday made the key steal on Booker in Game 5, leading to an and-1 dunk from Giannis Antetokounmpo, which ultimately led to their victory. Despite a forgettable first half in Game 6, Holiday is talented enough to make up for an awful performance.

Holiday is clearly one of the Bucks’ anchors and he needs to be special from the get-go. But that’s easier said than done in a high-pressure possible close-out game.

The Milwaukee Bucks have shown immense passion against the Suns in the 2021 NBA Finals after being down 2-0 to come back and win the previous three games. As of writing with only 4 minutes to go in the last quarter, the home team is holding a 4-point lead at the Fiserv Forum. 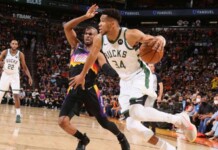