During the start of the season, the Brooklyn Nets franchise was left in frenzy after point guard Kyrie Irving decided to opt out of playing after pointing out his stance on the vaccination regime. The entire NBA world criticized the player for being unreliable which is acceptable as the Nets were at that time the obvious winners on the title this year.

After weeks of debate and an outbreak of the virus, the Brooklyn Nets have finally come to terms on allowing the all-star to play all road games moving forward into the season. Unfortunately Kyrie himself entered health and safety protocols upon the announcement. He will still possibly make his debut next month and here is what critics have to say.

NBA Analyst Skip Bayless and Shannon Sharpe sat down together to discuss the situation on Undisputed. Bayless turned out to be seemingly annoyed of that fact that Kyrie Irving was granted permission to play fot the team after the crisis that had taken place earlier in the season.

“So on this point, I despise having to agree with you (Shannon Sharpe) but I must, because the second I heard they had crawled back to Kyrie Irving I tweeted,’ Kyrie won, Nets Caved. Makes me sick’ because it should not have been this way.” said Bayless in an annoyed manner. The analyst had pointed out on the fact that Kyrie had betrayed his squad because of covid and the team sought help from him because of it.

He further went on to call out the NBA player on his own words saying, ”I just kept clinching my teeth over it because a final statement he made was that he is ready to back and pursue their goal of winning a champion chip.” Bayless was not on the same level as Kyrie as he pointed out that Kyrie had not been genuine on his remarks about joining the team on their journey to becoming champions this season.

The Nets are legitimate threat with Kyrie Irving

The Brooklyn Nets have dominated the Eastern Conference in the absence of their point guard Kyrie Irving as they are seated as the first seed with 23 wins and nine losses so far. They are seated above the newly termed contenders Chicago Bulls. “They survived without him, they didn’t fall to the bottom of the heap. The Bulls are serious business but these guys are more serious, especially with him back.” said Bayless.

He further went on to comment on a possible slow start to Kyrie’s season which is arguably valid considering that he has not played with the team in a while. According to the Analyst, even if Kyrie were to take time to get into shape, it would happen just in time for the playoffs that we would see Kyrie in full form.

Kyrie Irving’s return is projected to occur on the 6th of January, 2022 against Indiana Pacers. He had also began practicing with the team earlier this week.

“Never cross your lines with me”: Lakers’ Carmelo Anthony rages on heckling 76ers’ fans in the post-game conference 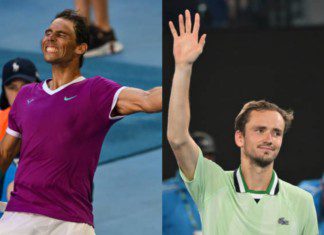