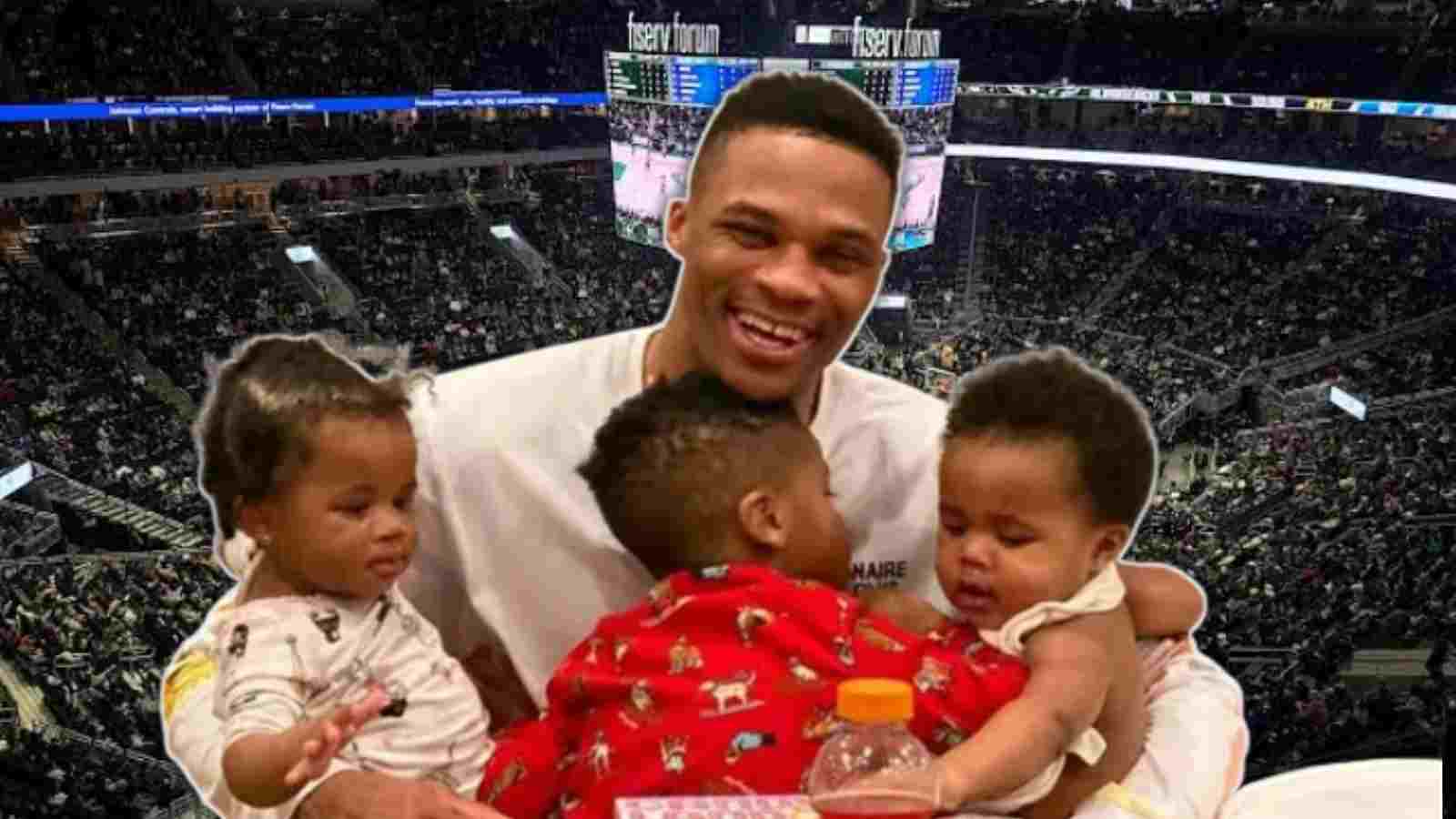 Russell Westbrook with his kids

Russell Westbrook is all over the NBA headlines as he recently crashed ESPN’s intro to show some love to his family watching him ball from back home. Brodie was the guy against the Bucks who carried the Los Angeles Lakers past the Giannis Antetokounmpo led Milwaukee Bucks. Shifting to the second unit has done wonders for Russell Westbrook as he’s back with the stats and influence we know him for.

Against the Milwaukee Bucks, Russell Westbrook did a little bit of everything to make sure the Los Angeles Lakers land on the fortunate winning end. He got into heated exchanges, trolled and clowned the former FMVP, Giannis Antetokounmpo on the foul line and even stepped up big on the defensive end during clutch time. So it’s fair to say Russell Westbrook showed up when the Lakers needed him the most.

Also, Russell Westbrook maintained a happy mood and had great energy even before the game started. As during ESPN’s introduction for the game by Mike Breen and Jeff Van Gundy, Brodie interrupted the broadcasters to just show some love to his kids and family supporting him from home. Russell Westbrook is really a family guy and unfortunately, he and his family has experienced a lot of trauma past year. But now with him balling out and getting MVP chants he’s the new hero of the Hollywood-based team.

Also Read: “He grabbed me UP,” After slapping the life out of Chris Rock, Will Smith made candid confession about his ‘lowest point’ in front of…

Recently, the Milwaukee Bucks hosted the Los Angeles Lakers at Fiserv Forum. The game was closely contested and head-to-head all the time. As both the teams were doing anything and everything possible. Also, let’s not forget the battle between two of the best Power Forwards in the league: Anthony Davis and Giannis Antetokounmpo. The Lakers wrapped it up at 133-129. Russell Westbrook was fired-up and played a very important role throughout the game.

In the game, Russell Westbrook dropped 15 points, 7 assists and 11 rebounds. He backed up Anthony Davis who ran the offensive end while dropping 44 points, 4 assists and 10 rebounds. Even Giannis Antetokounmpo put up great numbers as he had 40 points, 5 assists and 7 rebounds but those weren’t enough.

Russell Westbrook also had the most important play of the game where diving for a ball he got the possession which gave the Lakers 5-point leads. If Brodie and the Lakers continue to play at this pace with a healthy superstar duo of LeBron James and Anthony Davis. They are surely booking themselves a playoff berth. Right now, the Los Angeles Lakers are ranked at the 12th spot in the western conference with the record of 9 wins and 12 losses.

Also Read: “Felt like Superman II when he gave up all his powers,” 50-year-old Shaquille O’Neal revealed how pathetic he felt in a recent pickup game