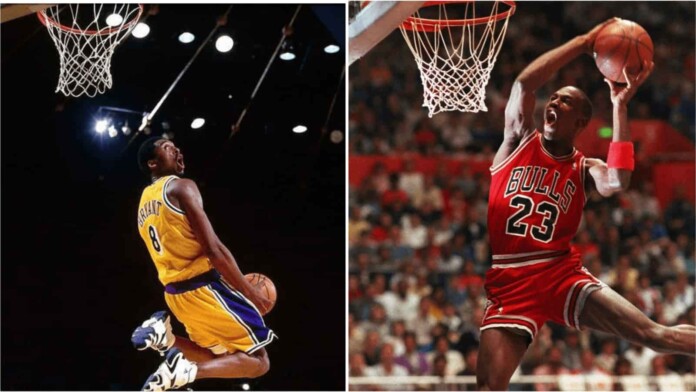 Over the year, the NBA might have changed to enormous heights, be it the inclusion of more 3-point shooters or taller defensive players. Interestingly what still remains the same, is the raw ability to make powerful dunks. And there were 2 players who were clearly better than many, Michael Jordan and Kobe Bryant. Yet Hall of Famer Reggie Miller chooses between them.

In a recent interview with Reggie Miller was in conversation with Dan Patrick to compare the dunking abilities of Michael Jordan and Kobe Bryant. Miller gave Jordan the nod while putting forward arguments to support the statement.

Who did Reggie Miller choose between Kobe Bryant and Michael Jordan as the NBA Dunk-King?

There was no better sight in the NBA than when “Air Jordan” took flight. The absolute dominance with which he dunked the ball was unbelievable. Similarly Bryant was also a flashy dunker with his infamous reverse jams. His aesthetic beauty was a treat to watch as some might argue he was better than Jordan, but when “His Airness” took a flight to the rim, it left people speechless.

“Jordan… Yeah, I was saying this, Kobe was probably more artistic, as he had the great reverse dunks Jordan never had. But Jordan used to embarrass you on some of them dunks. To me, the all-time classic Jordan dunk is the one against the Knicks in the garden, when he is going baseline, fakes the other way, and then continues to go baseline, and then pipes on I don’t know that is Patrick or I don’t know who. Looked like all of the New York Knicks. That is probably my best dunk ever of Michael Jordan,” said Miller.

Michael Jordan has had numerous award worthy dunks during his prime, especially the one of Patrick Ewing. On the other side, who can forget Kobe Bryant’s jaw dropping 360 degrees turn and dunk in the air?

Let us know who do you think is the better dunker between Michael Jordan and Kobe Bryant.