Nets vs Bucks was the season opener to mark the 75th edition of the NBA. The NBA’s 2021-22 season tipped off with the defending champions, the Milwaukee Bucks going up against the Brooklyn Nets (also one of the favorites to win the title this season) team led by a future hall of famer and prolific scorer in Kevin Durant

The Milwaukee Bucks managed to tower over their opponent throughout the entirety of the game defeating them 127-104 with six Bucks players scoring in double digits. Team leader and reigning league MVP Giannis Antetokounmpo concluded the game scoring 32 points with 12-25 from the field all while snatching 14 rebounds and dishing out 7 assists during the game.

What was Opinionated by Shannon Sharpe on Nets vs Bucks

Expert NBA Analyst, Shannon Sharpe had nothing to say but praised Giannis and the team for not getting carried away post their finals victory. He stayed appreciative of the team’s determination to continue winning.

Regarding the Brooklyn Nets in comparison to their uncertain rotation, Sharpe said that the Milwaukee Bucks are far more organized with each player understanding their role on the court. He further went on to say that the core of the team is tighter having experienced more playing time with each other on the court.

“This wasn’t about what the Nets didn’t do, this is just who the Bucks are.” Said Sharpe, explaining that the Bucks” were just overall a better team on the court regardless of how the Nets chose to respond to them.

Throughout the game, the Bucks simply had the upper hand offensively and defensively even going on a 21-4 run during the first quarter. Kevin Durant led the Nets by scoring 32 points with 21 points scored in the second half of the game. He also grabbed 11 rebounds earning him a double-double for the season opener.

Newly acquired point guard, Patty Mills scored 21 points during the game flushing down 7 out of 7 from the 3-point arc. James Harden, through which a part of the offense runs, had 20 points 8 rebounds and 8 assist playing a decent game for the Nets.

Head Coach Steve Nash said that the team were not very good, during an interview post match up. “If you’re not playing at a high level against the champs, you’re not going to win.” said coach Nash.

As of now, the team has plenty of time left to prepare themselves for redemption as they are scheduled to face each other again in January. 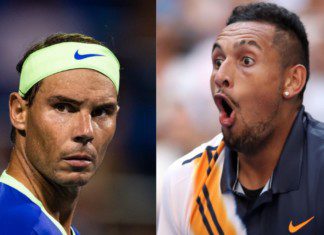 Drishti Geete - January 26, 2022
Former World No.1 Rafael Nadal has been a part of the headlines for a long time. Last year, he was badly injured in the...