Rui Hachimura may be seen charming the court once again after months of absence due to personal reasons as per the Wizards injury reports. Hachimura was drafted by the Washington Wizards in 2019 round: 1, pick 9th overall. The 23-year-old has been with the Washington Wizards since then and was also named as the NBA All-Rookie Second Team in 2020. Playing as the power forward, Rui averaged 13.8 points, 5.5 rebounds, and 1.4 assists last season for the Wizards.

The Hornets gained a 10 point lead over the Wizards in the 2nd quarter and maintained it until the end. Montrezl Harrell scored 24 points and 18 rebounds for the hornets with no assist. Bradley Beal also contributed 18 points, 7 rebounds, and 9 assists.

With Rui Hachimura sparking a soon return the fans are elated as they have missed him in action.

Rui Hachimura gets fans excited through a shooting practice footage

The Washington Wizards had both Rui Hachimura and Davis Bertans in Tuesday’s practice session. But it wasn’t entirely a 5 on 5 match practice. In a recent video posted on Twitter, we can see Hachimuuurrra draining three-pointers as the ball just slips through the ring like butter.

As per reports, the Wizards Head coach Wes Unseld told the media that it wasn’t a physical practice but rather a mental training session. He said, “It was more of a mental day. We did a lot of scripts, a lot of shooting, a lot of cleanups. But it was good to have them out there and see them do things with pace.”

Rumor has it that the reason why Hachimura took such a long absence was to focus on his mental health. Being a player at such a high level exposes one to a broad spectrum of audience and to criticism. Internet is easily accessible to everyone, so are the comment sections and, sometimes it takes a toll on people. Thereupon, it is important to learn to deal with Social Media criticism or it will drive a person crazy.

The Wizard’s coach continued to add, “It’s still slow going. But he’s shooting the ball well, which is great. We’ve seen him impact the game in the dunker [spot], working below the defense, his paint finishing, his ability to drive and score. It’s still early, but to have him out there and be part of days like this is invaluable.”

The NBA Twitter is all fired up with this news cause’ it’s been a while since Hachimura has stepped on the court.

Though there isn’t any fixed timeline for Rui Hachimura’s return to the games, the head coach told the reporters that Rui will be traveling with the team on their road games and practice while being at it. The Wizards will square off against the New Orleans Pelicans today at the Smoothie King Center, New Orleans, LA.

Also read: “JJ Redick is just who the people need”- Twitter reacts to… 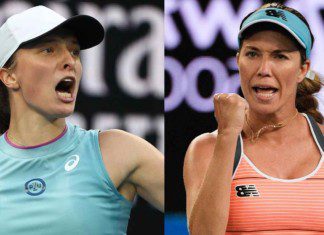 Nirmit Mehta - January 26, 2022
Danielle Collins stormed into the semifinals of Australian Open 2022, as the American defeated Alize Cornet in straight sets in the last eight battle....