Since the beginning of this season, Curry has shown that he is not just playing but playing with big numbers this time. The Golden State Warriors haven’t had a good season for the past two years due to injuries and well transfers. Klay Thompson’s absence on the court just made things harder for Curry and Draymond Green. and. Durant leaving the Warriors further multiplied those responsibilities.

The Veterans had to outdo themselves with every game or the Warriors would have sunk. Well, they did sink, but while fighting. Curry had to average a 40 point game last season but Basketball is a 5 man game. Though one can handle it pretty well for some time but till when?

Stephen Curry does what he’s best at Beating Buzzers!

The Warriors’ previous match-up with the Charlotte Hornet had a very mixed experience for the fans. The Golden State Warriors have been prodigious till now. With a score of 11-1, they were ready to take on the Charlotte Hornets, and to be honest the entire NBA fan following kind of predicted the Warriors as the winners too.

But NBA is nothing if not unpredictable. The Hornets did a pretty good job at turning the tables at the clutch point. Facts being considered the Warriors gave into the momentary mistakes which led to their loss.

With 20 seconds left on the clock, the Warriors and the Hornets engage in a clutch jump which Green lost to Rozier. Soon, after the play resumed, Looney did a defensive foul on the Hornets’ Terry Rozier at the half-court making them take the score to 106, and shattering the Warriors 7 game win streak.

But something amazing did transpire at the end of the 3rd quarter when Stephen Curry didn’t just only steal the thunder of Hornets’ Kelly Oubre Jr but also got the entire arena on their feet with excitement. Stephen is not just a 3 point shooter, he does wonders with it when shoots the ball from anywhere on the court. Shintaro Midorima would have been happy to be friends with Curry if he ever saw him shooting.

Whatever happened in those 10 seconds became the highlight of the entire match. Kelly Oubre shoots an amazing three but as they say, never celebrate early. With 0.07 seconds left on the clock, Curry shot a deep three buzzer-beater from the sticker and it just blew everyone’s mind. The Warriors would have lost the 3rd quarter with 2 points but they won it with a point’s lead.

The Warriors though have met their 2nd defeat of this season but are quite positive about how they have been performing so far. If those monetary mistakes could be controlled then the Warriors have nothing to fear. On Thursday they will be facing the Cleveland Cavaliers, and we can only hope that Stephen drops one of his amazing plays again. 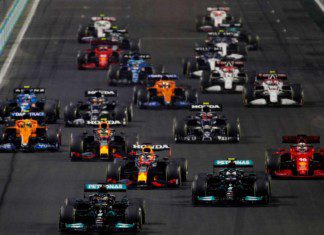 Rishabh Negi - January 25, 2022
James Allison the Mercedes Chief Technical Officer has recently come out with a statement that is going to worry a few of the teams...