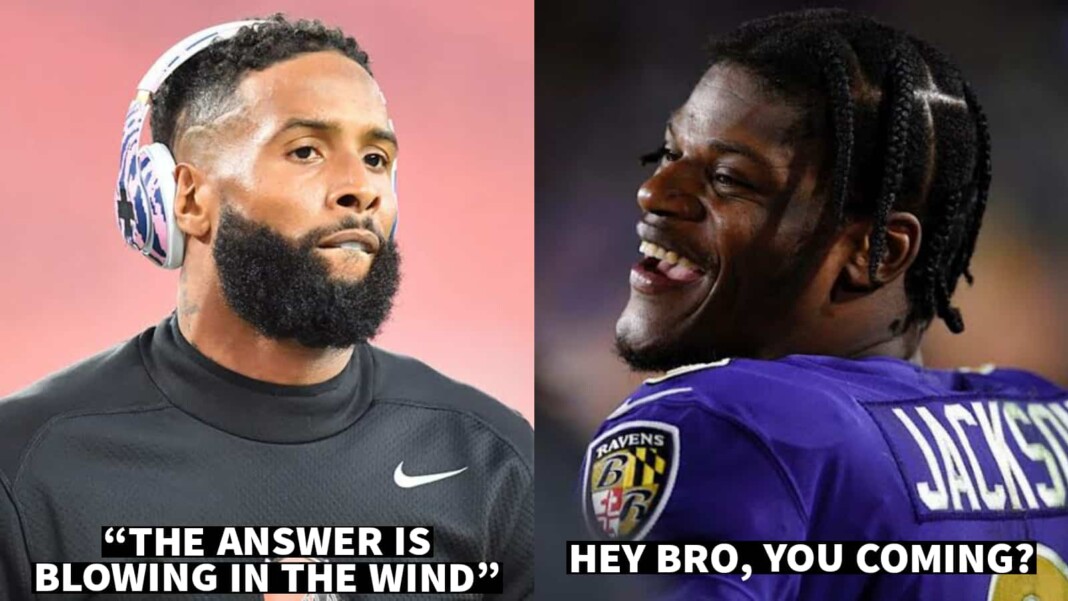 Lamar Jackson messaged a Ravens fan who was very excited about Odell Beckham Jr.’s release from the Cleveland Browns after rumours of a dispute with Baker Mayfield. He responded to the fan’s tweet by stating, “I can’t do nothing for y’all @ the @ravens not meeee (two rolling on the floor laughing emojis). I can’t do nothing.”

The Browns confirmed that they will be releasing Beckham on his 29th birthday. Following the move, he will be hitting the trade shelf and that will carve open a chance for all the NFL teams to claim one of the best catchers in the antiquity of the tournament. When we say all teams, it also includes the mighty Ravens who will come looking for him.

If Beckham can clear the waivers successfully then the teams will be able to sign him. However, the erstwhile Giants star is still to go public about his situation and drop a word or two about his release which has become the talk of the town with the ravens’ fans going absolutely crazy for him.

Beckham’ release was revealed after he was excused from a couple of practice sessions this week. However, Cleveland kept him at the franchise beyond the trade deadline on Tuesday. To compound matters for him, Beckham’s dad took to Instagram to post a video of Baker Mayfield missing out on throws to Beckham from open plays and used the hashtag “hurt”.

It is needless to say that the acquisition of Beckham by the Ravens will script one of the most dynamic duos in the current NFL roster as Lamar Jackson continues to haunt opponents. On top of that, even Sammy Watkins made a return in the game against Indianapolis Colts. Rashod Bateman took the place of Watkins while he was injured. On top of that another wide receiver, Marquise Brown has been pulling off a phenomenal job.

Even though Beckham has failed to pull off remarkable figures for this year, yet the glorious antiquity that comes in his trail is too overwhelming to refuse. His addition to a team that has been running riot already will spell doom for any other team in the roster, especially taking into consideration his captivating catching factor.