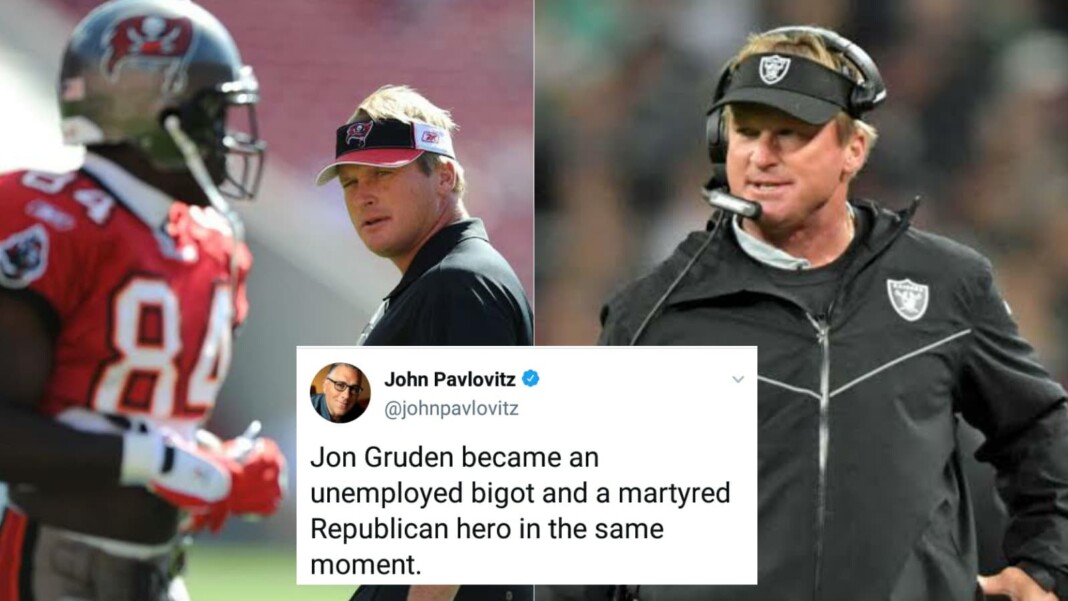 Jon Gruden renounced his position as the Las Vegas Raiders preceptor after allegations of homophobic slurs and misogynistic comments in emails that dated back by 10 years. The New York Times enlisted emails where he has made the homophobic and misogynistic statements that came in the wake of racist remarks by another union leader.

His renouncement from the Raiders coaching position is striking in its own capacity because of the lightning rise and fall of Gruden in a very short span of time. His coaching stature had risen to the zenith after he won a Super Bowl, served as a marquee analyst for ESPN and returned to the N.F.L to take care of resurgent Las Vegas Raiders.

This is what Jon Gruden had to say about the incident

He issued a statement in the wake of his resignation, citing, “I have resigned as Head Coach of the Las Vegas Raiders. I love the Raiders and do not want to be a distraction. Thank you to all the players, coaches, staff, and fans of Raider Nation. I’m sorry, I never meant to hurt anyone.”

Mark Davis, the owners of the Raiders quoted in a statement that his resignation was accepted and Rich Bisaccia, the special team co-ordinator was transcended to the position of a interim head-coach. The entire series unfolded when the New York Times reported on a posse of NFL incumbents who were connected in disseminating the racial slurs and carrying out misconduct in the workplace.

Though Gruden was not linked directly to the move, it was found that he had unleashed a volley of homophobic and misogynistic language upon people around him to disrespect them and has openly mocked the tidal changes and movements introduced by NFL over the span of the years.

He renounced the emergence of women as referees, the drafting of a gay player and the tolerance of players putting up a protest during the national anthem going by the report of the times. Gruden’s emails were sent to Bruce Allen, the erstwhile president of the Washington Football team while he was working as a colour analyst during Monday Night Football.

There were several references of him being angry with the new developments regarding the various queer movements and promotions in the league. Twitteratti wasn’t particularly a fan of these language. However, they were also not a fan of the fact that Gruden had to resign for something he said decades ago. According to the fans, much more heinous offences were plying their trade in the ongoing league and Gruden lost his job because of his chequered past.

Also Read: Watch: Video of Dan Campbell breaking down after another moral-shattering loss…