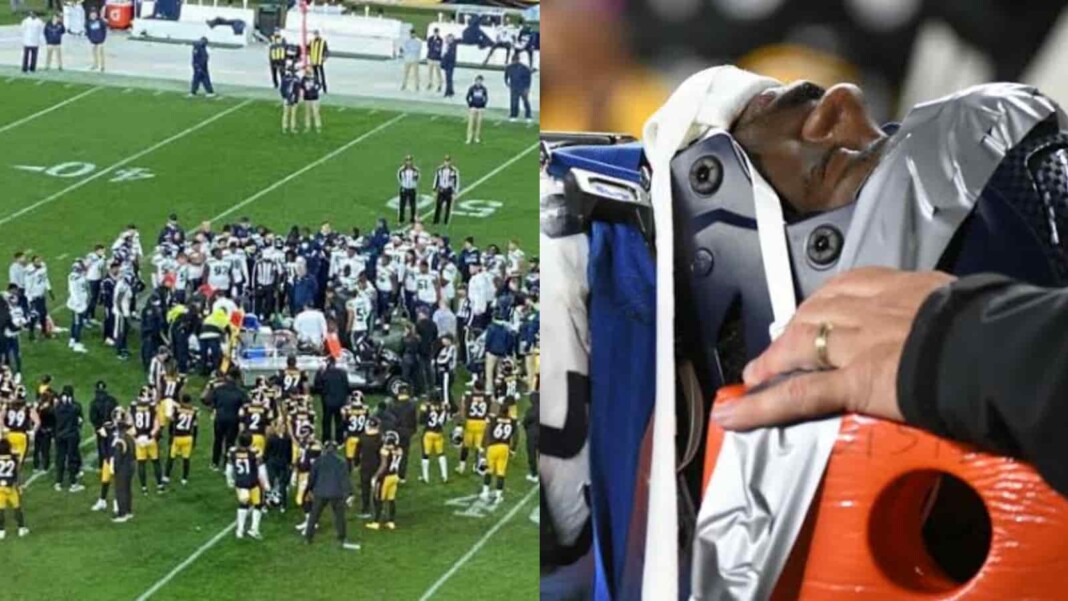 Seattle Seahawks defensive end, Darrell Taylor had to be stretchered off the field after a horrific clash with his own teammate in their week 6 match-up against the Pittsburgh Steelers. However, the Seahawks head coach, Pete Carroll eased the worry of the fans by providing a positive update on the latest reports that were available on Taylor’s crash with his compatriot.

To give you a brief glimpse of affairs, the 24-year-old defensive end was trying to tackle the Steelers running back, Najee Harris. However, in the process of tackling Harris, he winded up in a wrecking ball after colliding with his own teammate, AI Woods. In no time, he collapsed and was barely flinching while his team surrounded him.

The aftermath of Darrell Taylor’s injury

The sight of the injury was downright horrific and to add to the fans’ woes, given the fact that Taylor had to be stretchered off the field flagged that the injury was serious. The Seahawks’ players seemed to be evidently worried as the expressions on their visages relayed a thousand emotions and none of them were positive enough.

However, Carroll ensured that Taylor would have been capable of getting up if the medical staff would not have thwarted him from doing so, keeping in mind the precautionary measures that were to be imposed in case of a head or a neck injury. Going by the on-field discussions, the second-year-man was ‘so mad’ that he had to be taken off the field on the stretcher.

In an interview with Pro Football Talk, he was heard citing, “He wanted to get up. They just wouldn’t let him do it because they had to do all the secure methods to take care of him and all that. Man, he didn’t want any part of that.” Going by the preliminary reports of Darrell Taylor, the CT scans showed that he was clear which is a good sign for the Seahawks’ defensive end.

Carroll was heard quoting, “That’s a really good preliminary report for you. There are more tests to be done and stuff like that. So, we’re thrilled about that news.” The Seahawks bowed down to the Steelers in the OT after a late surge saw the latter walking away with the bragging rights. The defeat now seems relatively smaller vis-à-vis the mounting injury list.

Also read: Watch: Lamar Jackson Jr. Reacts To His Jersey Getting Retired From…