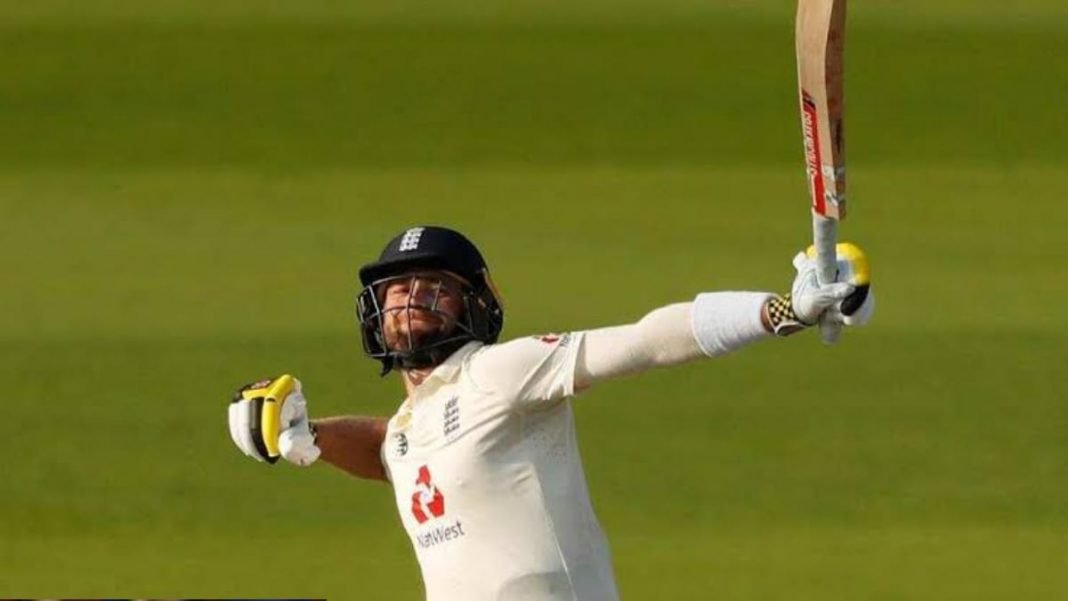 Chris Woakes held his nerves to steer England to a thrilling three-wicket win on Day 4 of the first Test against Pakistan at Old Trafford in Manchester.

Woakes remained unbeaten on 84. Buttler too did is part with a superb 75-run knock. They put together a partnership of 117 for the sixth wicket after a collapse. This happened after Yasir Shah dismissed a well-set Dom Sibley for 36 in the post-lunch session and then gave a body blow to England by removing Ben Stokes early.

In between, Naseem Shah got the huge wicket of Joe Root for 42 and then Afridi got rid of Ollie Pope to leave England in a spot of bother. Earlier, England had bowled out Pakistan for 169. Pakistan scored 32 runs in just 16 balls in this morning to set England a target of 277.

It was a full toss. Buttler goes for the reverse sweep again but misses it altogether. Huge appeal from Pakistan and umpire raises his finger.

Yasir not giving up

OUT! LBW! Stuart Broad goes for the sweep, fails to make contact and it hits him straight in front.

FOUR! Outside edge and it goes through the vacant slip cordon for a boundary. He has played one of the best innings of his life to steer England to a thrilling victory at Manchester.

Chris Woakes and Jos Buttler decided to counter attack after Yasir Shah dismissed a well-set Dom Sibley for 36 in the post-lunch session on Day 4 and then gave a body blow to England by removing Ben Stokes early in the first Test at Old Trafford in Manchester.

In between, Naseem Shah got the huge wicket of Joe Root for 42 and then Afridi got rid of Ollie Pope to leave England in a spot of bother. Mohammad Abbas had given Pakistan the first breakthrough by removing England opener Rory Burns.

Over 35.6 Edged and gone! Yasir Shah has struck for Pakistan. Dom Sibley goes for 36. It was the sucker ball that brought about the downfall of Dom Sibley.

Over 38.4 Big moment in the game. Naseem Shah, who had been finding the outside edge of Joe Root’s bat, has finally managed to get him out.

Over 41.6 OUT! Yasir has got a huge one. What a fantastic review by Pakistan.

Over 44.6 OUT! Unplayable delivery. That one shot up from nowhere. Nothing much that Pope or any batsman could have done to that one.

Over 45.5 OUT! Edged and taken. Yasir Shah’s entertainment comes to an end. But he has done his job. He scored 21 runs today off just 9 balls.

Pakistan all out for 169

Over 11.1 OUT! Umpire’s call on height, the decision stays. Pakistan have got their first breakthrough and it’s that man Mohammad Abbas again.

England made a strong comeback in the last session through Chris Woakes, who got the wickets of Babar Azam and Azhar Ali to peg Pakistan back. Dom Bess too chipped in with the wicket of Abid Ali. Pakistan’s lead is inching towards the 200-run mark with four wickets down.

Yasir Shah struck thrice in quick succession after lunch and Shadab Khan picked up the last two wickets as Pakistan bowled England out for 219 on Day 3 of the first Test at Old Trafford in Manchester.

Pakistan in second innings reached 20 for 1 at Tea and now lead by 127 runs. Yasir first cleaned up Buttler for 38 and then got Dom Bess and Chris Woakes. Shadab Khan who got the only bowled 3.3 overs in this innings picked up the wickets of Jofra Archer and James Anderson to wrap up the England innings.

Earlier, 67 runs were scored in the first session as England went to lunch on Day 3 at 159 for 5, trailing Pakistan by 167 runs.

Over 13.6 OUT! Joe Root introduced his off-spinner Dom Bess early into the attack and he has struck in his first over. Not the best of shots from Abid Ali.

Over 19.5 OUT! Big wicket, Chris Woakes has got the big wicket of Babar Azam. Brilliant catch from Ben Stokes at second slip.

Over 23.5 OUT! Plumb in front. Pakistan has lost its fourth.

Shafiq falls to a run out

Over 33.5 RUN OUT! England needed a spark, a splash of brilliance and Dom Sibley has provided just that with his fielding.

Over 38.2 Over OUT! Umpire’s call! Ben Stokes is the man again for England.

Over 39.6 Three reds. Good review from England, good delivery by Broad, Pakistan are losing their grip over this match.

Yasir Shah struck thrice in quick succession after lunch and Shadab Khan picked up the last two wickets as Pakistan bowled England out for 219 on Day 3 of the first Test at Old Trafford in Manchester.

Pakistan in second innings reached 20 for 1 at Tea and now lead by 127 runs. Yasir first cleaned up Buttler for 38 and then got Dom Bess and Chris Woakes. Shadab Khan who got the only bowled 3.3 overs in this innings picked up the wickets of Jofra Archer and James Anderson to wrap up the England innings.

Over 53.2 BOWLED! Yasir Shah strikes.Jos Buttler goes for 38. What a peach of delivery.

Over 57.4 OUT! Spin, bounce everything right about that ball.

Over 61.4 BOWLED! Yasir gets his third. Flatter delivery but not short enough for Woakes to go onto the backfoot and pull it away.

Over 66.4 OUT! Shadab Khan, in only his 2nd over of the Test match has got one to really grip the surface and turn it.

Over 70.3 OUT! Shadab Khan has got his second. Anderson misses his reverse sweep and the ball thuds onto his front pads.

Over 1.6 OUT! The centurion of first innings, the man who looked like he wasn’t going to be dismissed in the series, is out for a duck in the second.

67 runs were scored in the first session as England went to lunch on Day 3 at 159 for 5, trailing Pakistan by 167 runs at Old Trafford in Manchester.

Jos Buttler and Chris Woakes are the creases. After Ollie Pope scored a half-century, youngster Naseem Shah got him out following the drinks interval. Renewing the day at 92 for 4, England batsmen were given a tough eternity by Pakistan seamers.

A flick towards deep square leg and a couple of runs taken brings up Ollie Pope’s fifth half-century in Test cricket.

Over 44.3 OUT! A ripper from Naseem Shah sends back the dogged Ollie Pope.

England is 92/4 at stumps on Day 2, trailing Pakistan by 235 runs. Yasir Shah broke the budding partnership between Joe Root and Ollie Pope. He forced a nick off Root’s bat and he hands it to the keeper. Earlier. Mohammad Abbas and Shaheen Afridi had quaked England top-order, dismissing Rory Burns, Dom Sibley and Ben Stokes.

Naseem Shah has edged it to the keeper. Stuart Broad gets another wicket. Batsman reviews – but that seems out. Pakistan 326 all out.

Over 0.4 Rory Burns trapped on a straight one from Shaheen Afridi. Huge LBW appeal, the umpire was not interested. Pakistan reviewed. Three reds.

Over 3.2 Mohammad Abbas tangles Dom Sibley and the umpire has raised his finger. England opener takes a review. Three reds.

Over 5.3 What a beautiful delivery from Mohammad Abbas that goes through Ben Stokes and lists the top stump of Ben Stokes, who departs for a duck.

Over 19.5 Yasir Shah strikes as Joe Root gets a soft nick and edges it to the keeper.

Shan Masood has put in a virtuoso performance to take Pakistan’s score past the 300-run mark. He shared a 105-run 6th wicket stand with Shadab Khan to nullify England’s advantage.

Jofra Archer picked up two wickets in two balls to bring England back in the contest along with spinner Dom Bess who sent back Shadab Khan for 45.

Shan Masood brings up his century as Pakistan regain control in the match. This is Shan’s 4th Test hundred.

Dom Bess strikes as Shadab runs out of patience

Over 95.3 Finally another wicket has come for England and it has been a while. Shadab Khan looking to reach his half century with an almighty heave but the ball goes up in the air for Joe Root to complete an easy catch.

Over 102.2 The extra pace of Jofra Archer has worked for England as he gets past the defence of the solid Yasir Shah to pick up his second wicket of the innings.

Archer comes back the next ball to get an edge off Abbas and has now picked up 2 wickets in 2 balls.

Shadab Khan and Shan Masood took Pakistan to 187/5 at Lunch on Day 2. Chris Woakes dismissed Mohammad Rizwan as the batsman edged it to keeper. Pakistan are five wickets down.

Over 49.6 Anderson strikes first over on Day 2, Babar Azam departs. Pak 139/3. A big blow to Pakistan early in the day. Babar tried to get a run, but gave an easy catch to Joe Root.

Fifty for Shan Masood. It is on him now to take Pakistan to a good total in the first innings. Masood has looked good so far and he has to play a long one here.

Over 56.5 Length delivery from Stuart Broad, gets a leading edge off the bat from Asad Shafiq, easy catch to Stokes.

Over 70.1 GONE! Woakes forces an edge wide off the crease, gets an edge from Rizwan, straight to keeper. Pakistan are five wickets down.

Good first session for England and they have certainly got back into the game.

Shan Masood and Shadab Khan take Pakistan to at 187/5 Lunch on Day 2.

Pakistan scored 139/2 on Day 1 in the 1st Test vs England in Manchester. After the rain stopped play for three hours, extra time was added at the end of the day, with Babar Azam and Shan Masood resuming the innings from 121/2.

The visitors reached the Lunch break at 53/2, with Shan Masood and Babar Azam at the crease. Azam made a confident start to the second session, as Pakistan crossed the 100-mark within the first hour of the session.

When the rain stopped play, Babar Azam had attained his 50 and added a 78-run stand with Shan Masood.

Stumps have been called on Day 1 because of low light after several rain interludes.

Tea has been taken and Pakistan 121/2 at Tea. Rain stops play after Babar Azam brings up his half century.

Babar Azam smashes a six and then follows it up with a single and brings up his half century in style. What a talented show from the batsman!

Rain stops play after Babar Azam brings up his half century. A great partnership is being built between Babar and Shan who have taken Pakistan past 100-run mark.

Babar, Shan take Pakistan to 53/2 at Lunch and Chris Woakes dismissed Pakistan captain Azhar Ali for a duck. Pakistan are two wickets down.

Over 15.1 Jofra Archer bowls a ripper through and through Abid Ali. It goes through the bat and pads to knock down the stumps.

Over 18.1 Chris Woakes has rapped skipper Azhar Ali onto the pads.This is OUT!

Slow start from Babar Azam. He finally got off the mark after a fair number of deliveries.

After the victory against West Indies, England stride straight on to the first test of their three-game series with Pakistan.

The match, part of the ICC World Test Championship, takes place at Old Trafford, Cricket Ground, Manchester, from August 5 to August 9, and the live-action starts at 3.30 pm each day.

Pakistan have won the toss and elected to bat against England. Pakistan name both Shadab Khan and Yasir Shah, two leg-spinners, in their XI.