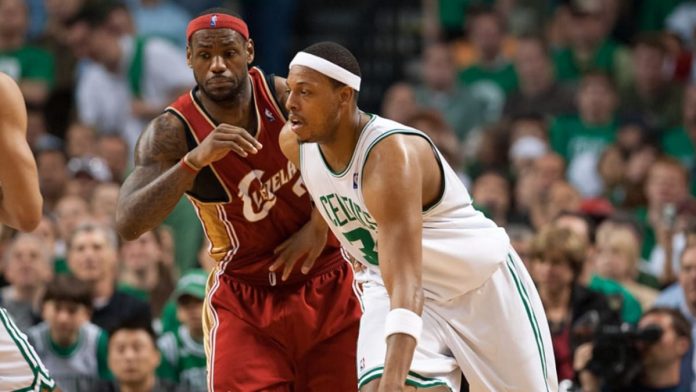 NBA has always had a fair share of controversy. However, the incident that happened recently has outraged the modesty of the game. Recently, the former NBA veteran Paul Pierce aired an Instagram live while he was surrounded by strippers. Paul Pierce was slammed by the NBA fans for putting the live session on air. The ESPN has now secluded the former basketball player over his actions and put a ban on him.

Paul Pierce played a major part of his career for the Boston Celtics. He retired in 2017 from the same franchise and started working as a NBA analyst for the ESPN. According to sources, Paul was surrounded by women cladded in bikini suits. Some of them danced around him while others gave him massage. Pierce was a huge part of the ESPN show ‘The Jump’ and NBA countdown. His actions made the fans amused while a lot of them were outraged. Paul happened to be live on two occasions. He aired the Instagram live along side strippers on 1st April and 5th of April.

Paul Pierce was a major part of Celtics organization. Other than that he was always surrounded by controversy. On one occasion, Paul was stabbed 11 times on his face. This incident happened in 2000. However, this ‘Stripper Incident ‘ has forced the ESPN to make a tough call. They have chosen to part ways with the analyst. More than what people called a controversy, Pierce termed it as chilling it with the exotics dancers. Paul Pierce has come out with a short statement following the consequ3nce of the event. He said ‘Big things coming soon. Stay tuned and make sure u smile.’

Paul tweeted this statement along with a hash tag #truthshallsetufree. The former NBA player was coined the pet name ‘truth’ by the former NBA legend Shaquille O’ Neal. His statement might be another side of the story that no one knows. A lot of revelation with respect to the facts are still pending. What if Pierce opens a new side that may contradict his video? A lot of it still depends with what Pierce has to say about it.

Aikansh Chaudhary - June 13, 2021
The Test series between India and Australia earlier this year was memorable for various reasons. One such reason was the rise of Shubman Gill...