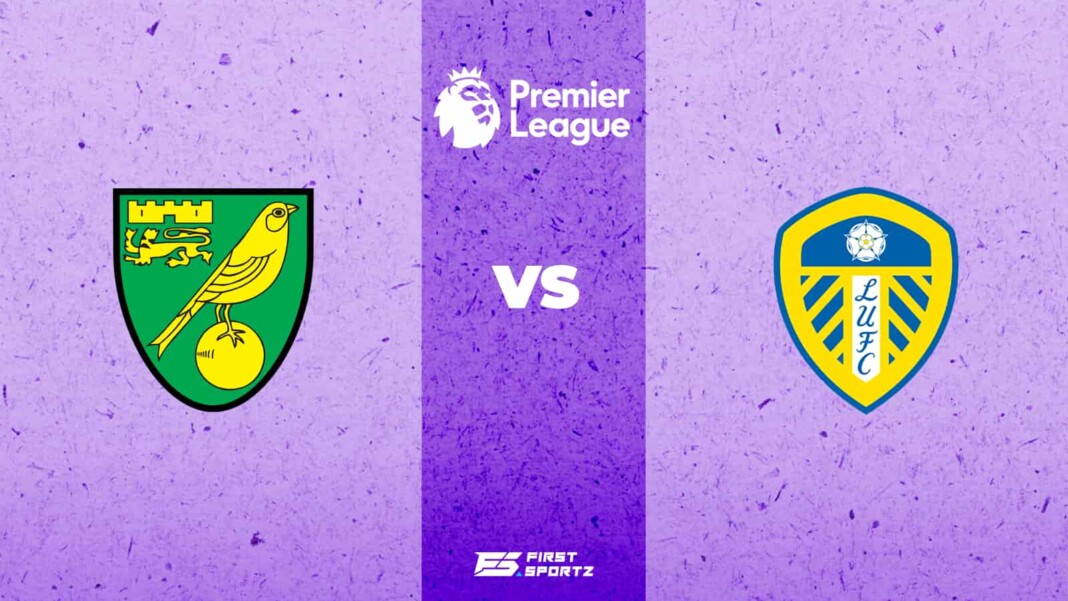 Leeds condemn Norwich City to a 2-1 defeat to leave the hosts with a lot of concerns and decisions to make. The visitors got the better of a flurry of three goals in four minutes, inspired by their mercurial winger Raphinha. Norwich were deserving of a point, but they fell short at the vital moment, when Krul might have prevented Rodrigo’s winner.

The quality of this game in the first half was mediocre, but the suspense and energy were excellent. Norwich has remained consistently upbeat despite an absence of creativity. Leeds appear dangerous on the counter-attack, particularly when Raphinha is involved.

The best chance fell into the feet of Dan James but his shot was blocked on the goal line. The second half started with end-to-end stuff but Leeds tried to penetrate the Norwich City defense more.

The game took some crazy turns as there were three goals in four minutes, first Raphinha, followed by Omabamidele’s header and followed by Rodrigo’s goal. Leeds held on to the lead well for the points.

Tim Krul: 5/10 The Norwich City goalkeeper could have definitely done better to not concede the second goal and he would be gutted with that.

Max Aarons: 8/10A great performance from Aarons as he looked brilliant at times winning duels for Norwich City and recovering the ball, but was also threatening with his runs.

Ozan Kabak: 5/10Not a good game from Kabak as he lost more duels (11) than he won (10) in the game and could have done better to not concede the goals.Grant Hanley: 7/10Hanley had a good game and was solid for most of the match but had to be sacrificed in the end for an attacker.

Andrew Omobamidele: 7/10Omobamidele did really well for the goal and also had quite a decent backline performance filling in for Gibson.

Milot Rashica: 8/10Another good wing back performance from Norwich City as Rashica just like Aarons was brilliant and he got a deserving assist.

Mathias Normann: 8/10Definitely the one of the best Norwich City players from the evening as Normann won the highest duels in the match alongwith good overall play.

Kenny McLean: 6/10A poor performance from Mclean in the midfield as he could not help his partner and lost the ball quite a few times.

Joshua Sargent: 5/10Not a very good day for Sargent as he could hardly contribute to the game, and got no shots in the game throughout.

Kieran Dowell: 5/10Another Norwich City player who was woeful in the attack was Dowell as he could not deliver one good set piece in the game.

Teemu Pukki: 5/10A very poor outing for the Norwich No.9 as he could hit only one shot, that too off target, and had the least touches in the game.

Christos Tzolis: 6/10Tzolis was brought in to add attacking flair to the game as he was given the No.10 role, but it was too late as Leeds settled with the lead.

Illan Meslier: 7/10Great performance from Illan Meslier as he made sure Norwich don’t get something out of nothing and made excellent diving saves.

Jamie Shackleton: 7/10Shackleton had a decent game but had a problem just after the hour mark and could not carry on for a lot of time. He had the most tackles while on pitch.

Diego Llorente: 7/10A solid game for the Spanish center back as he alongside Cooper pocketed the Norwich attack for most part of the game.

Liam Cooper: 7/10Cooper looked decent throughout the game and did all he could alongside Llorente in a good defensive performance to hold the lead.

Stuar Dallas: 7/10Dallas had a really good game being sound defensively and he was also the most accurate passer in the game with 92% of passing success.

Pascal Struijk: 8/10Struijk was amazing in the game as he was not only instrumental with the runs in the both goals but he hardly let anyone attack.

Kalvin Phillips: 8/10An impressive game playing as the sitter in the double pivot as Phillips not only made recoveries and the highest passes, but also got an assist.

Raphinha: 9/10Another masterclass from the Brazilian as he not only gelled in the game soon but also ran the attack the whole game and got a deserving goal.

Daniel James: 8/10James was brilliant in the game as he got an assist with a good ball and was just unlucky in the first half to score himself.

Jack Harrison: 6/10A silent game from Harrison where he could shoot the ball only once and was blocked, and could not impact the game.

Rodrigo: 8/10Another player who was impressive with his technical quality throughout the game and got a lucky goal to boost his confidence.

Cody Drameh: 6/10Drameh was subbed on to fill for Shackleton in the game as he had an amazing match, but Drameh did well.