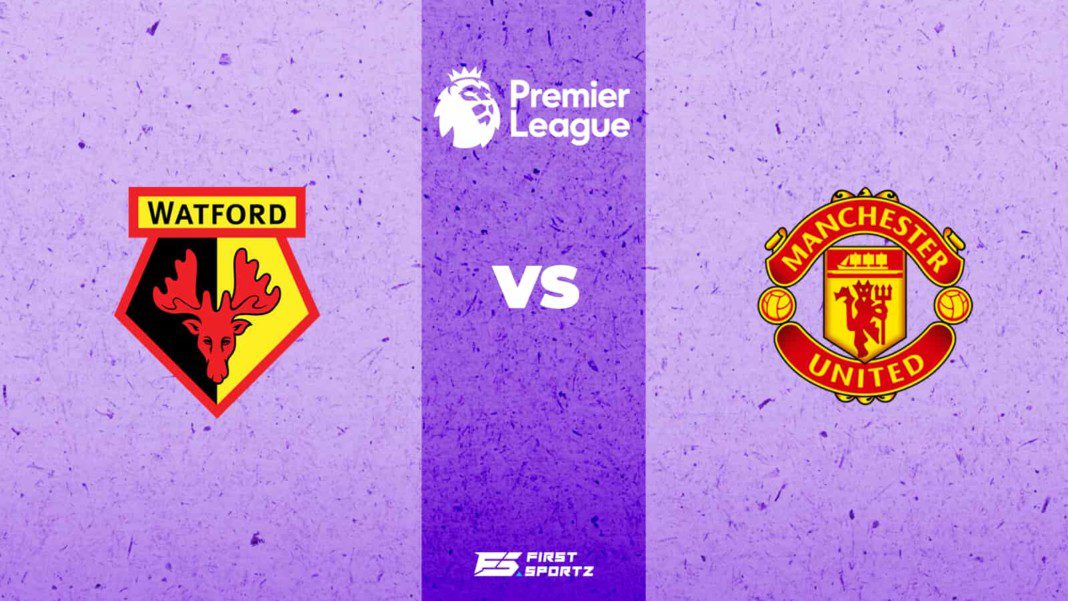 It was a horrifying scene at Vicarage road for Manchester United as they were beaten by 4-1 by the home team, Watford. This turned out to be one of their worst nightmares as the Reds dropped down to seventh in the league after the loss. As for Watford, they moved up to 17th, staying clear of the relegation zone.

The match started with magnificent first half goals from Joshua King and Ismaila Sarr who gave an inevitable 2-0 lead for Watford. As Manchester United walled into the second-half with hopes for a comeback, Donny van de Beek lived up to it. Him being five minutes into the pitch, he nodded a header off Cristiano Ronaldo’s header to pull one back for his side.

However, fate had different plans for Manchester United. As the match went into added time, goals from João Pedro and Emmanuel Dennis ensured a 4-1 win for Watford at home, one they’ll never forget and one the Reds would be hoping to.

After a thrilling encounter, let’s have a look at how the players performed for both the teams:-

Ben Foster (GK) (6.8/10) : Foster made some brilliant saves to keep the ball steer clear of the goal and just conceded a single goal which he couldn’t have done much about. A gallantry effort with the gloves.

Kiko Femenía (7.3/10) : Femenia received a deflection from a misguided clearence from the United defence and he pulled it back for Sarr who took his time and drilled a low shot across goal, past de gea and into the far side of the net.

Craig Cathcart (6.4/10) : Craig did a decent job at defence by making some valuable clearences while also doing well with ground duels. However, it wasn’t that impactful to help his side much.

Nicolas Nkoulou (6.6/10) : Just the 64 minutes of gameplay for Nicolas Nkoulou. He did a brilliant job overall but wasn’t that impactful for his side which initiated his substitution.

Adam Madina (7.4/10) : A brilliant performance as he was too quick to be caught by the others. He made some brilliant tackles and won some excellent ground duel battles.

Moussa Sissoko (6.8/10) : The captain had a decent game overall. He managed to do something with defence and while making a good run towards the goal, he got his shots blocked in the defence.

Ismaïla Sarr (6.8/10) : Sarr scored seconds before halftime. Another poor defence clearence by Manchester United granted a ball to Femenía. He then pulled it back for Sarr who took his time and drilled a low shot across goal, past de gea and into the far side of the net. Walked off with an injury later.

Imran Louza (7.4/10) : Imran was really quick with his feet as he managed to win a couple of good interceptions while also doing a great job at winning tackles.

Tom Cleverley (6.5/10) : A below average performance by Tom Cleverley. He barely got any wins in the ground duels department and lost possession on quite a few occasions.

Emmanuel Bonaventure (8.1/10) : Out of the four goals scored tonight by Watford, Emmanuel assited two of them while also getting himself a goal in the late few seconds before the match ended. What a wonderful performance by the forward.

Joshua King (7.5/10) : Joshua King got control of a poor clearence by Wan-bissaka and he pounced onto that opportunity. He received a brilliant assist by Emmanuel Bonaventure to which he side footed past de gea to make it 1-0 in favour of Watford. The home side get the lead in the 28th minute.

Joao Pedro (7.9/10) : Joao had barely gotten time to settle in as he walked inside at the 77th minute. He made a brilliant finish in the back of the net to earn himself a goal.

David de Gea (GK) (5.7/10) : It was a dreadful show by the keeper as he let past four goals which must really hurt his confidence for his future endeavours. He magnificently did save a penalty but all in vain as his own error lead to conceding a goal.

Aaron Wan-bissaka (6.3/10) : Wan-bissaka was very sloppy in the defence. He did win a fair few interceptions but of no use as he did lose possession of the ball on multiple occasions.

Victor Lindelöf (6.3/10) : Lindelöf gave his all to the game but couldn’t help contain the Watford forwards. He did a decent job at defending but wasn’t impactful enough.

Harry Maguire (6.4/10) : Maguire was doing a fine job at defending with his clearing, tackling and Interceptions. However, he made a wild last man tackle which earned him a red card in the 69th minute.

Luke Shaw (6.4/10) : Luke Shaw usually is a good incharge for Manchester United in the defence unit but he failed to help his side get over the line. He walked off with an injury in the 85th minute, however, the damage was already done.

Scott McTominay (6.3/10) : Just the 45 minutes on the clock to play for Scott McTominay. He barely won any ground duels and he wasn’t able to impact the game in ways the team would’ve wanted. His low skill show initiated his substitution.

Nemanja Matic (6.5/10) : Matic made some good long balls and also had a shy at goal but was way off target on attempt. However, he failed to get possession of the ball as he lost it on multiple occasions.

Jadon Sancho (6.8/10) : Another game went by with Sancho failing to perform. He had an average game with a decent contribution ahead. He did make a couple of good runs which helped bag the only goal for Manchester United.

Bruno Fernandes (7/10) : Bruno was always right there creating big chances for United but he failed to get any kind of support ahead which could help the Reds score goals.

Marcus Rashford (6.2/10) : Rashford was completely bent out of shape throughout the half and he wasn’t impacting the game positively. Thus, he got substituted after the first half.

Cristiano Ronaldo (6.9/10) : The great transfer of the season for Manchester United had multiple shots at goal but he failed to capitalise on any of those and just saw his team keep conceding goals.

Donny van de Beek (/10) : He was a part of a brilliant gameplay. He was in the right place at the right time as Ronaldo cushioned a header back across goal and van de Beek threw himself to nod it into the back of the net. In just five minutes of his time on the field, he pulled one back for Manchester United.