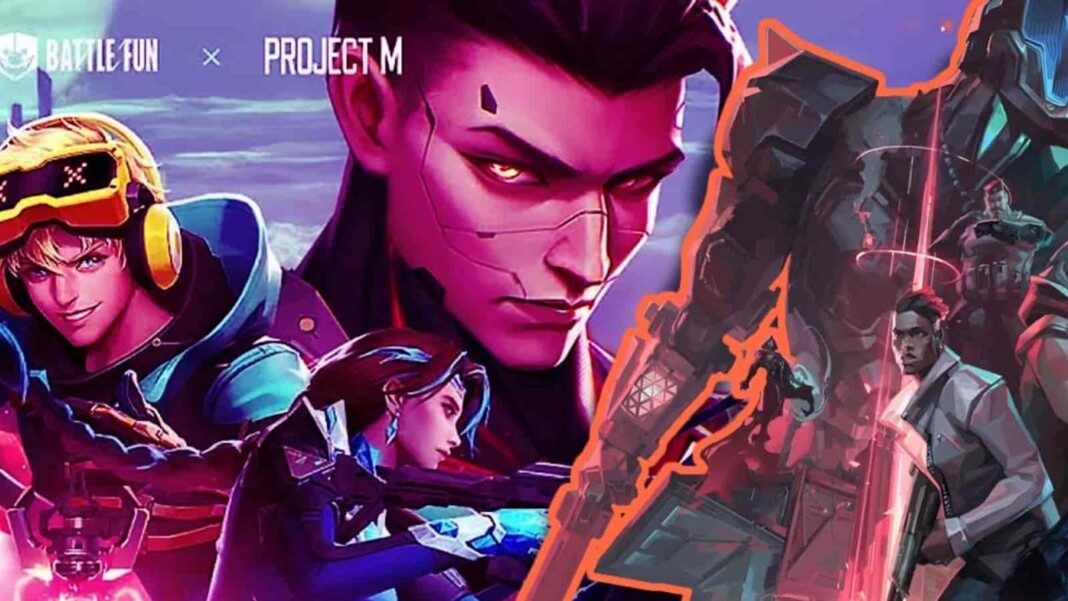 Project M Valorant lookalike is a game that looks a lot like Valorant. It has gained popularity across the gaming community and has taken the PC gaming world by storm. A game whose name is presumably a nod of the cap to Valorant’s original designation of Project A is a tactical 5v5 shooter with hero abilities. Valorant was named Project A in its early days of beta. A similar-looking and playable mobile game has given rise to a lot of controversial comparisons between these two games recently. The article talks about Project M and the similarities it has with another popular 5v5 FPS game, Valorant.

The similarities the game shares with Valorant are awe-striking, if not outrageous. While the game as a whole is a total Valorant misnomer, from spike planting to a 5v5 tactical shooter with agent abilities, characters and maps are on spot as well. The map in the trailer looks exactly like Haven in Valorant and Reyna’s leer, Kj’s ultimate, Sova’s drone, Omen’s smoke makes them all very obvious.

A mobile version of Valorant has been rumored for quite a while, and Riot confirmed their plans to expand to mobile.  In the meantime, it looks like Chinese games publisher NetEase is trying to fill that Valorant-shaped void on mobile with a 5v5 competitive arena shooter of their own called Project M.

NetEase, the massive Chinese internet and video game company has announced a beta test for its upcoming five-vs-five mobile tactical shooter, Project M. And after one look at the trailer, it appears that Project M is taking a heavy amount of influence from Riot Games’ VALORANT. The game looks eerily similar to Riot’s 5v5 tactical shooter but has not been discussed the same publicly.

Riot has seen plenty of success with some of their most successful franchises on mobile such as with League of Legends Wild Rift, and thus Valorant seems like the ideal next candidate. The presence of NetEase’s “Project M” in the same FPS space as Riot will probably complicate matters a little bit.

Project M is a free-to-play tactical hero shooter game developed by NetEase, one of the biggest video game companies in China, which is, amongst other things, responsible for operating Blizzard’s games in the country. NetEase announced Project M fairly recently and the beta test period has already begun, starting August 5 – and will last till August 6 on the Google Play Store.

The name “Project M” sure seems deliberate, given that Riot first teased Valorant under the codename “Project A” in 2019. Project M has been widely accused by the community of ripping off Valorant’s popularity by putting together a game for mobile the resembles Valorant in most aspects.

From the game’s visual style to the UI design, fonts, sounds, and even the upbeat futuristic music, everything seems like something clearly designed to mimic Valorant.

The trailer shows a collection of “special abilities” that characters can use, with some of these abilities appearing to be direct copies of some from the VALORANT agents. Versions of Sage’s Barrier wall, Sova’s drone, and Brimstone’s tactical smokes can be clearly seen, among others. Even the bomb that’s meant to be planted and defused in the game’s search and destroy mode looks like the spike.

NetEase is a competitor of Riot Games’ parent company Tencent. It appears that their main motive was to compete with them in the tactical FPS market by releasing the game before Riot Games.