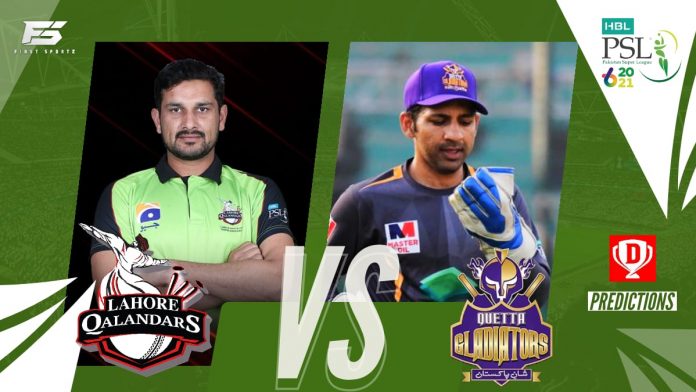 The fourth match of the Pakistan Super League (PSL) 2021 will take place between Lahore Qalandars (LQ) and Quetta Gladiators (QG). Both sides will lock horns for this clash on February 22, 2021, at the National Stadium in Karachi. The game will kickstart from 7:00 PM local time – 7:30 PM (IST) onwards and will be streamed live on Sony Sports Network and Sony Liv.

Both the sides are coming to this with contrasting results in their previous respective matches. LQ registered a comfortable win in the opening clash of the season against Peshawar Zalmi. Their star speedster Shaheen Afridi won the ‘Player of the Match’ award for his brilliant spell of 3/14.

On the other hand, QG suffered a comprehensive defeat against Karachi Kings by seven wickets. However, the two sides are unlikely to make much changes in their sides ahead of this clash.

Let’s look at our fantasy 11 predictions for this clash and here are the top picks for LQ vs QG.

Also Read | IPL 2021: “I’ll give you all the reasons to whistle” – Robin Uthappa’s message to Chennai Super Kings fans

Here are our three picks for probable Dream11 Fantasy captain for LQ vs QG:

Here are our three picks for probable Dream11 Fantasy vice-captain for LQ vs QG:

Also Read | IPL 2021: Sachin Tendulkar posts a cryptic tweet; fans think it is a message to critics of Arjun Tendulkar