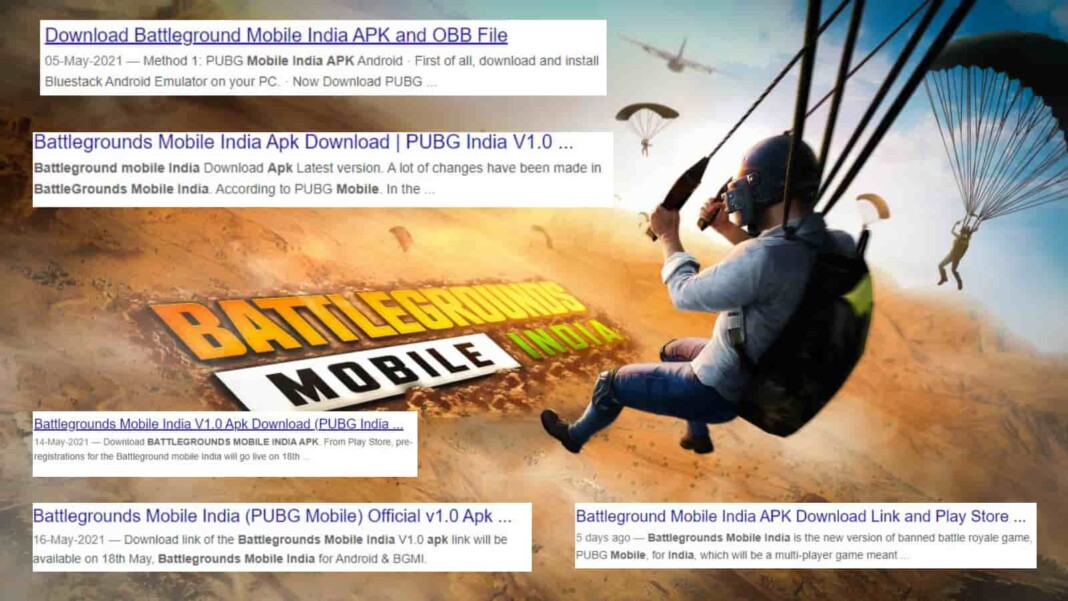 Multiple Website producing fake Battlegrounds Mobile India APK files on the internet. It is seen that many cheaters are taking advantage of players’ desperate wait for their much loved game.

The launch date of Battlegrounds Mobile India is not yet revealed by the developers which is one the hot topics in the Indian Gaming community who are so desperately waiting for the game’s comeback & launch in the country. The pre-registrations of the Battlegrounds Mobile India (previously called PUBG mobile India) had a kick start earlier this month i.e., 18 th May and the players were pre-registered for thier favourite game.

A fun trailer regarding the launch of pre-registrations for the Battlegrounds Mobile India game had been released by the officials on the same day on their official YouTube channel. The trailer was launched starring the most famous Indian PUBG personalities – Jonathan, Dynamo, Kronten alongside Indian superstar Arshad Warsi.

Fake Battlegrounds Mobile India APK files are out on the Internet

We suggest you to not to fall for such fake traps or files that they offer which are however original or related. It is better not to click on such links and download any files on such fraudulent sites. Downloading or accessing any files on such websites may inject virus to your device which leads to harm. Moreover, they are not safe and may cause potential threats to your personal information by stealing them.

The sites also have so many ads. Therefore, we suggest you not to search any links for the Battlegrounds Mobile India APK or PUBG mobile India APK as the game hasn’t been released yet.

Even before the game’s release in the country, the political ministers in the country urges higher officials to ban the game addressing the privacy and security issues due to which PUBG Mobile was banned in the country back in September 2020 amid India-China Rivals.

The developer Krafton answers a question on the support page of Official game’s website regarding the Battlegrounds Mobile India’s launch date. The answer states:

However, there are multiple launch theories floating on the internet of this most awaited games’ release. Most of them Suggest that the game would release on June 10 which is just a speculation as there is no official confirmation on it.