20-time grand slam champion Roger Federer has played just one tournament in almost 16 months. After multiple knee surgeries, he made a comeback earlier this year in Doha where he was knocked out in the quarter-final.

Federer then said that he would take some time to train and recover completely. He will be back in action and begin his Clay season at home in Geneva before playing the French Open. The Swiss maestro has started training on the red dirt two weeks prior to the Geneva Open. He posted a video on instagram of himself hitting his trademark ‘one-handed backhand’ on Clay.

Federer had earlier said that he will be prioritizing Wimbledon and Tokyo Olympics this year. He will be playing only three tournaments ahead of Wimbledon; two on Clay and one on his beloved Grass.

Federer likely to be the top seed at Geneva Open

The Geneva Open had to be canceled in 2020, like the entire European clay swing due to the COVID-19 pandemic. It will return this year after the Rome Masters and will begin from May 16.

The tournament will feature home favorite Roger Federer who will go in as the top seed. Most top players will skip the tournament due to its tight scheduling. It is held just before Roland Garros and hence players are wary of any possible injury.

Also read: ‘I just don’t enjoy playing tennis like I did a few years ago,’ Andy Murray reveals his mental state 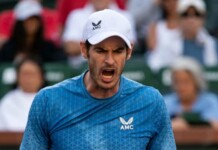